So far we’ve seen the viral campaign for Super 8 split into two narratives. There’s the Rocket Poppeteers storyline and then there’s the tale of Josh Minker and a mystery man (dubbed Mysterio by ARGers) who have to work together to figure out the secrets of Minker’s father. We got a jolt in the latter story this week as Minker’s blog was hacked into, and the two main characters had a conversation that leads us to a map of Nevada. Get the details after the break.

Josh Minker’s fish-centric blog was hacked into a few days ago, with this blog being posted (which has since been deleted):

Sorry to hack this but you weren’t paying attention. Check email for credentials. BXTSLWK729. I know you just found where to use this (/explanation).

Since “/explanation” looks to be part of an URL and the last URL we found in the viral was for Revalistic.com, the guys at Unfiction (via Super 8 News) figured out that “BXTSLWK729” works as the password for Revalistic.com/explanation. On the site is a lengthy conversation between Josh and the owner of the site, Sarah.

I’m sorry. I didn’t want to hack your site but I didn’t know what else to do. I know you’re mad but please let me explain.

Explain what you’re doing running some conspiracy site? After everything I’ve told you? You’ve been lying to me this whole time!!!

I know I really messed this up, please. Just let me explain.

Jesus, it’s like everyone lies. All the time. Is your name even Sarah?

I used to work at an oil company. I was a consultant, an engineer. Several months ago, I found scanned copies of files in a locked directory. Lots of weird information, referencing projects nothing like what our company was developing. There are things in those files that I’ve never heard of. Materials that shouldnt exist. And inone of those files I found your name.

Great. What did it say?

It was just your name and your mom’s. That’s why I had to find you.

I didnt understand it, I told you. All I got was your name. I figured if i could find you, maybe you’d be a clue as to what the file meant. Why my company was involved.

You came to find me from that? from some name in a file? you’ve been lying to me for months for that?

It wasn’t all lies, Josh. I’m sorry. I never meant it to get this far but I found you, weird stuff kept happening to you. I know you’re in the center of whatevers going on and it doesn’t affect just you. My company is involved somehow. Whatevers going on is bigger than either of us.

What company are we talking about

I’m sorry, I can’t tell you. My dad works there, too. Until I know what this is about, I can’t risk putting him in danger. I promise I’ll tell you everything else. I want to help you. I want answers just like you do. We’re on the same side.

You shouldve been honest with me.

I couldn’t. I found this group, they told me they were all about revealing the truth. They told me I was doing everything right. That I shouldn’t tell you in order to protect you. Then they all disappeared when I didnt find anything.

I see. So you and your friends broke into my house, didn’t you?

I’m sorry. I had to know if you were keeping anything from me.

I can’t believe you’d do that

I was just scared. The file scares me, whatever you’re involved in scares me. But I have to know what’s going on. And so do you.

Let me help you.

If any of this is true—

If it is, you should’ve told me from the beginning.

I know. I’m really sorry. I didn’t know what kind of person you were.

Are you still there?

Yes, I promise. You can trust me.

I have no choice but to trust you. I need help.

Then let me help you. Can we meet?

I’ll call you. Keep your phone on.

At least now we know who broke into Josh’s house a while back, as well as the name of the owner of the new viral site. Of course, this is also verification that this is in fact a new site in the ARG. Read the latest post on the site that references the doctor/author from our last update, as well as some new energy source involving magnets. The object featured in the trailer and the new viral site S8editingroom looks to have magnetic powers, so I wouldn’t be surprised if they are connected.

You might make the leap that Sarah is Mysterio, since Josh has been talking to him/her about this for months as well, but a chat the next day reveals that’s not the case. Check out Josh and Mysterio talking about Sarah and what to do next below (the chat log is not available anymore it seems, but you would go to STIES and click on the chat icon to read it, password “toadfish112”). 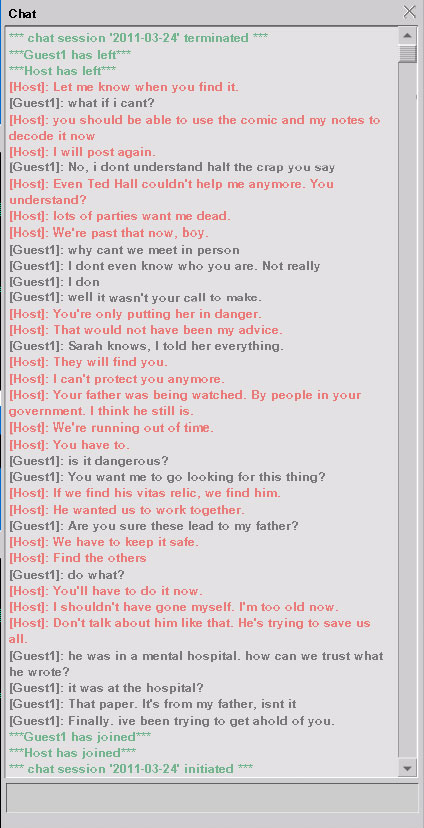 So, Mysterio is not happy about Sarah knowing, and we hear about the “vitas relic” again, which is apparently the key to finding Josh’s father. Mysterio’s comment about “Even Ted Hall couldn’t help me anymore” is strange, and the only notable person I could find with that name is a Theodore Hall, a Russian spy who helped the US develop the first atomic bomb. We’ll keep an eye on that to see if it goes anywhere, or if it’s just an off hand comment. Also, it’s interesting to note that Josh’s dad was in a mental institute. Could this conspiracy be in his head, or was he put there to shut him up?

I’m not sure what comic Mysterio is referring to, but if you remember it ever coming up, let me know. We do, however, have a new map, found in the Photos folder of STIES (again, password is toadfish112). The map is of Nevada, and has a building drawn in the middle of it, along with some numbers (it looks like 75125 and 042). The building is in the approximate location of Area 51, and despite being crudely drawn, looks a lot The Little A’Le’Inn, the famous food and lodging location just outside of the infamous base. 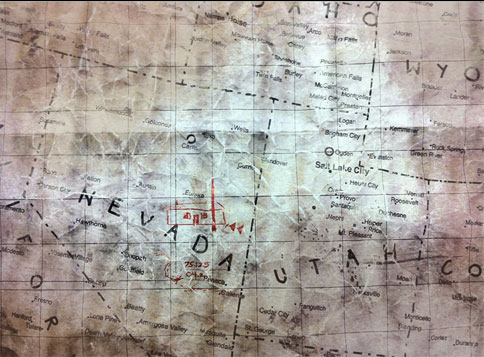 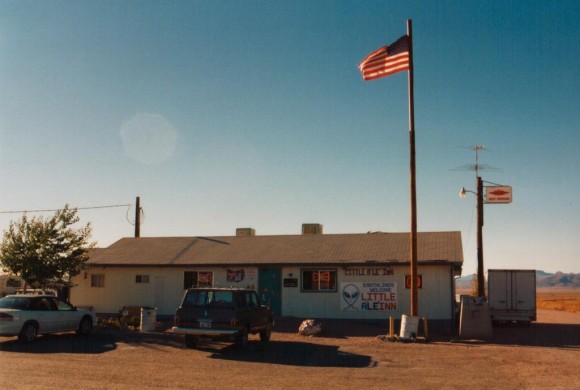 What could this mean? We’ll keep digging to see if anything else comes up, otherwise we may have to wait for the next update. For all the viral campaign news on Super 8, check out the Super 8 Viral Page.