Fringe’s “A Demon’s Twist Rusts”: An Anagram, A Countdown and Sam Weiss

Since we last reported on the Fringe 6:02 AM countdown, there have been some developments. Two more videos have appeared online and another is a mysterious anagram. What is the solution to the anagram? What is revealed in the new videos? What is going to happen at 6:02 AM? Hit the jump to find out!


Okay, so we still don’t know exactly what is going to happen at 6:02 AM, but we do know when the event is going to take place. The April 22nd episode of Fringe is titled “6:02 AM EST”, so we were right in our assumption that the event would take place on the East coast. It isn’t clear if it will take place in “over here” or “over there”, we’ll have to wait until the 22nd to find out.

Here is the first video to refresh your memory:

Two new videos have appeared online and both are very interesting. Watch them below:

This video depicts several key Fringe characters and their alternate versions. Also, we see the 6:02 AM flash at the very end.

This video shows glimpses of the events that occurred in the last episode that aired, “Bloodline”. We also see Sam Weiss, the guy who works in the bowling alley and helped Olivia regain her memory after her accident in the season two premiere. And once again, 6:02 AM. But, in the final seconds you are able to hear some reversed audio.

When played forward you can hear “A Demon’s Twist Rusts”. Naturally, this is very confusing and doesn’t make much sense. If you’re an avid Fringe fan then you’ll recall that in the season 2 finale, Walter and William Bell visit Walternate’s lab to find a way to get back to our universe and this anagram appears on the chalkboard in the lab. 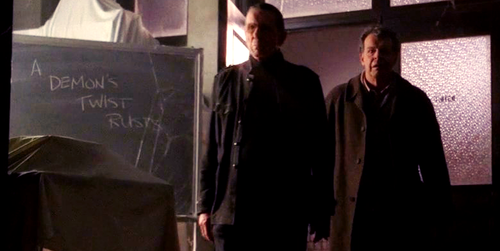 “A Demon’s Twist Rusts” scrambles out to “Don’t Trust Sam Weiss”. It was recently revealed that Sam Weiss is the author of the book, “The First People”…every edition of it, spanning from the 1800’s to the present. So exactly who or what is Sam Weiss and why can’t he be trusted? Is he from our universe or the alternate universe and what does he have to do with the 6:02 AM event? It seems once questions are answered, the answers lead you to more questions. Not to fear though, all of your questions will (should) be answered very soon.

Fringe returns next Friday, April 15th at 9 PM on FOX.