Get Ready to Be “Green with Envy”

Over the weekend, audiences who saw Pirates of the Caribbean: On Stranger Tides were shown a trailer for a film called Green with Envy starring Amy Adams and Jason Segel as a young couple who take a romantic trip to Hollywood for their anniversary. But all is not what it seems, and Green with Envy seems to be a cover for another movie. Find out more after the jump!

This film appears to be a romantic comedy, but why would it be advertised with a Disney movie like Pirates? Before you read on, watch the trailer below which debuted on YouTube today:

So, Green with Envy is really Disney’s The Muppets. Disney presented this trailer in an interesting way, usually fake or working titles are used during filming to conceal the identity of high profile films (Rory’s Choice=The Dark Knight). We’ll keep an eye on this to see if an expanded viral campaign starts (it seems it already has with the Facebook page being established), or if Disney will continue to market the Muppet’s return through viral videos.

Here is a teaser poster for Green with Envy with a Muppet hidden in the image. Can you spot it? (Click for a larger version) 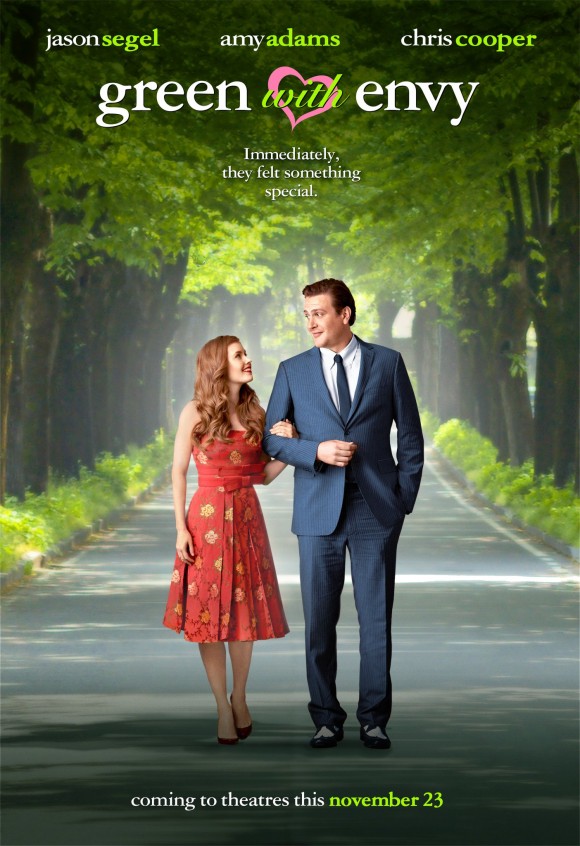 Directed by James Bobin (Flight of the Conchords), The Muppets follows Walter, the world’s biggest Muppets fan (a Muppet puppet himself) and his friends Gary (Jason Segel) and Mary (Amy Adams), who must save Muppet Theater by getting the band back together, so to speak, to stage an “old-fashioned extravaganza.” The cast is full of great celebrity cameos and other appearances, including Lady Gaga, Chris Cooper, Rashida Jones, Zach Galifianakis, Ricky Gervais, Alan Arkin and Billy Crystal.

The Muppets will hit the big screen this Thanksgiving!