If there’s two things we love here at MovieViral, it’s Super 8 and comics. Fortunately, the two come together in a contest regarding the Super 8 comic book that could win you an iPad, a prop from the movie, and more. Get the details after the break.

This is the first I’ve heard of the comic book, which is set before the events of the film, and whose connection to the plot line of the movie is unclear. Below is Amazon’s description/review of the “preview/teaser” comic book.

“The Soviets sent a DOG. The U.S. sent a NUKE.” If you are one of those guys that watches teaser trailers frame by frame to find hidden images, or if you spend ours online searching for secret promotional web sites, you can now take a break from all that, and study this comic book with a microscope, because this is a teaser or prequel comic book for the upcoming J.J. Abrams film “Super 8”. This 8-page glossy comic book contains images and narrative not seem in any trailers released as of May 25th of 2011, and offers story background in a flashback story of the dawn of the space age. Th cover, dated “1960” and designed to look like a comic book from decades ago, is by Alex Ross, top comic book artist known for spectacular nearly photo-realistic imagery. Interior artist Tommy Lee Edwards is renowned for detailed, naturalistic visuals. Writer Peter Tomasi has helmed many of DC’s best superhero books. Grab yourself a Slusho, sit back, and enjoy. Enter the Super 8 Comic Book Contest and win cool prizes. 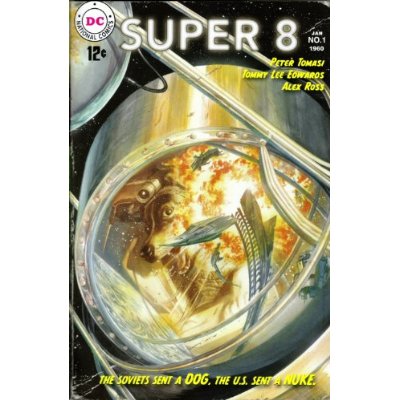 Super 8: The Official Comic Book Art Contest (hosted online here) is just what it sounds like. To enter, you simply submit a piece of “original custom comic book artwork”. Read the official rules below.

NO PURCHASE OR PAYMENT OF ANY KIND IS NECESSARY TO ENTER OR WIN THIS CONTEST. A PURCHASE WILL NOT INCREASE YOUR CHANCE OF WINNING.

EACH ENTRANT AGREES TO THESE OFFICIAL RULES.

One (1) Grand Prize, consisting of:

A total of five (5) First Prize, each prize pack consisting of:

Contest is open only to legal United States residents, including District of Columbia, at least thirteen (13) years of age or older as of May 25, 2011. Void where prohibited by law.

The following individuals are not eligible to enter and their entries will not be considered:

Employees, officers, directors, independent contractors, representatives and agents of Paramount Pictures Corporation (“Prize Provider”), Performance Entertainment USA, Inc. (“Sponsor”), (collectively, “Contest Entities”) and each of their respective parent companies, subsidiaries, licensors, divisions, distributors and affiliated companies, or any other sponsors of the Contest or any promotion, advertising, judging or public relations company doing business with any of the above, or any of their respective parent companies, subsidiaries, divisions, licensors, distributors and affiliated companies, or any member of their immediate families (parent, children, siblings, spouse, regardless of where they live) or any individual living in the same household of such employees (whether related or not) as such persons are ineligible to enter this Contest or win any prize.

At the Website, fill in all information requested on the entry form completely. Contest begins on May 25, 2011. All entries must be submitted and received by 11:59 PM (Eastern Standard Time) on June 9, 2011. Each entry must be submitted only once. Any entry submitted more than once will not be considered. Use of automated processes and devices to submit electronic entries are not permitted. Contest Entities are not responsible for any changes or effects caused by the entrant’s computer system as a result of submitting electronic entries. Contest Entities are not responsible for entries that cannot be processed due to phone, network, electronic or computer hardware or software failure, or technical failures of any kind. Incomplete entries will be disqualified.

Sponsor reserves the right at its sole discretion to disqualify any individual who tampers or attempts to tamper with the entry process or the operation of the contest or Website; violates these Official Rules; or acts in an unsportsmanlike or disruptive manner at any time during the Contest, or with the intent to annoy, abuse, threaten or harass any other person. By submitting your artwork, you accept all Contest Official Rules, including those not listed here that may be added at Sponsor’s sole discretion, and agree to be bound by the decisions of the judges, which will be final. You also agree that your artwork becomes the sole property of Sponsor, and Sponsor expressly reserves the right to alter, edit, adapt, copyright, publish, transfer and/or use any or all of it, without compensation. If your artwork is chosen as a winner and you are a minor, your parent must sign an assignment acknowledging this transfer of the copyright to Sponsor.

JUDGING
All entries must meet the requirements of the Contest. Entries not meeting Contest entry criteria will be disqualified. Judges will review all entries and pick a winner based on originality, quality, creativity and relatedness to the Super 8 comic.

WINNERS
Winners will be required to certify, on information or belief, that their artwork are their original creation and have not been published or publicized and have not won a prior artwork contest. Final judging will be completed by Bad Robot Productions. Decisions of the judges are final for all matters relating to this Contest.

Winners will be notified by a traceable form of delivery and email or telephone. By participating, entrants (and if not of the age of majority in state of residence, his or her parent or legal guardian): (a) agree to these Official Rules and to the decisions of the judges and the Sponsor and its agents in all matters, including the voting process, relating to the Contest, which decisions shall be final in all respects; (b) release, discharge, indemnify and hold harmless the Contest Entities, and each of their respective parent companies, subsidiaries, licensors, divisions, distributors and affiliated companies and their respective directors, officers, independent contractors, representatives, agents and employees from and against any and all claims, damages or liability , due to any injuries, damages or losses to any person (including death) or property of any kind, or damages of any kind whatsoever, including but not limited to the infringement of intellectual property rights of others, resulting in whole or in part, directly or indirectly, from their participation in the Contest or any Contest-related activity and the acceptance, possession and misuse or use of the prize; (c) if a winner, consent (except where prohibited by law) to the use of their name, voice, likeness, statements and location for advertising and publicity purposes by Sponsor, in its sole discretion, of its products and services; and (d) represent that the artwork submitted is their sole and original work and does not infringe the intellectual property right of any other party. Participants agree that Contest Entities and its agents are not responsible for late, lost or misdirected entries or mail, or for error, omission, interruption, deletion, defect, delay in transmission, theft or destruction or unauthorized access to or alterations of entry materials, or for technical, network, computer, hardware or software malfunctions of any kind, or inaccurate transmission of or failure of Sponsor and its agents to receive entries for any reason whatsoever or for any errors, mishaps or problems, regardless of the cause, in the voting process. In the event Sponsor determines that the integrity of the Contest has been impaired or corrupted for any reason and as a result cannot be offered or completed as planned, Sponsor reserves the right in its sole discretion to cancel or terminate the contest and to select winners from among eligible entrants legitimately received prior to the event causing cancellation or termination; and notice of cancellation will be posted at www.super8comiccontest.com. Should the sponsor and judges, in their sole discretion, determine that there are insufficient entries worthy of being selected as a winner, they reserve the right to select less than six (6) winners; The Contest shall be governed by and interpreted under the laws of the State of California; and any legal action concerting the Contest shall be brought only in a state or federal court located in California. Dates are subject to change.

PUBLICITY
By participating in this Contest, each entrant and their parent or guardian gives permission to Sponsor to use his or her name, photograph, voice, biographical information, likeness in any and all media, for advertising and promotional purposes, without further compensation or notice, worldwide and in perpetuity, in any and all forms of media, now known and hereafter devised, including without limitation on-line, unless prohibited by law.
The Super 8 Comic Contest is sponsored by Performance Entertainment USA, Inc. 655 N. Central Ave., 17th Floor, Glendale, CA 91203.
Prizes provided courtesy of Paramount Pictures Corporation.