A few days ago, we posted an article about what looked to be an official ARG for the upcoming film The Hunger Games, which comes out next year. We deleted the article after a Lionsgate rep told us that it was not official and possibly a scam to collect user data. After some research and conversation with the individuals behind the ARG, we have decided to repost the information so you can decide for yourself if you want to participate. Get the details after the jump.

In case you aren’t familiar, the film is based on a popular series of young-adult science fiction novels written by Suzanne Collins. The story is set in a post-apocalyptic world where once a year the tyrannical government of Pandem (somewhere in North America) hosts The Hunger Games, a televised battle to the death featuring children from different “districts”. In District 12, 16 year old Katniss Everdeen (played by Jennifer Lawrence in the film) is pitted against a boy she knows named Peeta Mellark (Josh Hutcherson). 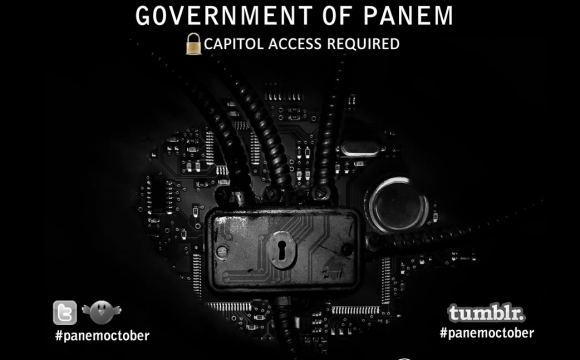 The upcoming fan-made ARG for the film is hosted on WelcomeToPanem.com and is set to begin in October, hence the game’s name, “PanemOctober”. You can sign up for the ARG on HungerGamesTesserae.com, where the story is that you are signing up for the games themselves. We’ll be following this viral even though it’s fan made, since it looks pretty well done. The people behind this also claim to have experience with ARGs, as they state on the site.

Please know that PanemOctober is a fan-made ARG for the Hunger Games upcoming film. We have past experience developing fan-made ARGs and October will launch an amazing, seriously extensive ARG for the fans, by the fans.
This website is in no way affiliated with Scholastic, Lionsgate Films, Suzanne Collins or any HG-related officials.

“The Gamemakers”, as they call themselves, have told me that no information goes to third parties, and that they have actually tried to contact Lionsgate to collaborate on the project, but they got no response. So, if you’re a fan of the novels and excited for the movie, I’d say go ahead and sign up and see what’s in store. You can also follow the game on Facebook and Twitter.

The Hunger Games opens in theaters on March 23rd, 2012. The film is directed and written by Gary Ross, who has written some of my favorite films, including Big, Dave, and Pleasantville (which he also directed).

Lionsgate has requested that the websites be taken down. We don’t have much more information, but when we learn more, we’ll update you.