“The Greatest Town in America” is Getting A Book

The popular NBC comedy Parks and Recreation is set in the fictional town of Pawnee, Indiana, which, according to it’s Welcome sign, is “First in Friendship, Fourth in Obesity.” You can find out more fun facts about Pawnee in a new book “written” by Pawnee’s Department of Parks and Recreation Deputy Director, Leslie Knope (played by Emmy Award Nominee Amy Poehler).


NBCUniversal Consumer Products and Hyperion Books are teaming up in this venture to publish Pawnee: The Greatest Town in America. The book will actually be written by “Parks and Rec” staff writers and will be from the perspective of Leslie Knope. The 240-page book hits shelves on October 4th, 2011 and will include illustrations, photographs and other characters’ commentaries. Each chapter will explore a different part of Pawnee’s fictional history as well as expand on events that occured in the series including:

…the time the whole town was on fire, its long list of ridiculous town slogans, and the ongoing raccoon infestation. 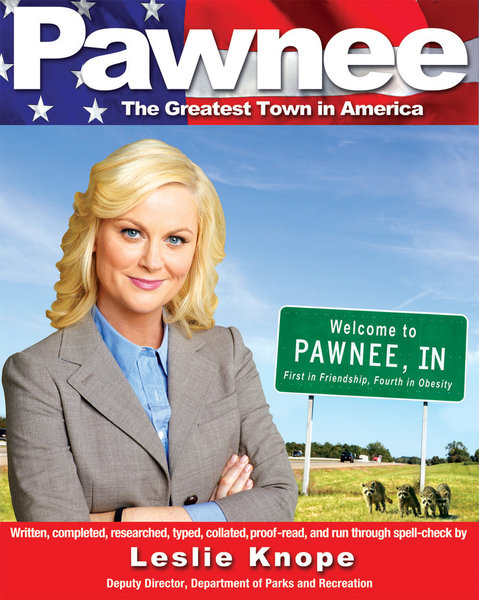 “The ever-expanding town of Pawnee has become its own character in our show, and we’re thrilled that we got to accelerate that expansion in one giant, goofy 240-page comedy book,” said Mike Schur, co-creator and executive producer of the series. “It’s a complete portrait of Everytown, USA, which every reader — whether a fan of the show or a newbie — can enjoy.”

Parks and Recreation returns to NBC for its fourth season this fall, Thursdays at 8:30 PM EST!