Review: “Cars 2” Gets Mangled but Still Manages to Cross the Finish Line

Pixar puts a lot of effort into making a compelling story that engages the audience both on a comedic level and an emotional level, but when the studio decided to create a sequel to Cars 2, one of their lowest praised films, a lot of people started to scratch their heads. With good reason of course. The first film had a lot of heart, the whole idea of a dying town that was the life of what road trips were or how the generation has forgotten about route 66 was a novel idea. Throw in a little color and a dash of character growth and you got yourself a little nugget of a good movie. But perhaps the most damaging thing to come out of Cars was that it looked like a large Chevron with Techron commercial. The concept of talking cars isn’t anything new at all, but the problem with Cars was its concept only got half of the intended target audience and failed to grasp the older ones. With Cars 2, expect the older audience to fall asleep while the younger ones are at play. Hit the jump to read the full review.

There is always a first for everything, and after watching Cars 2, I think I witnessed Pixar’s first disaster movie. Sure I can go back and regurgitate what I said about the first Cars being one of Pixar’s weaker films, but that is nothing when compared to this film. If you take a look back at what Pixar has produced throughout the years, Cars is perhaps the most successful brands that Pixar has in terms of merchandising. In fact Cars is the only Pixar film, that I am aware of, that has its own lineup of straight-to-dvd films called the Mater Tales. Now Cars 2 is like one of those tales, but just stretched out. Like butter spread on a toast with a hot knife, the movie starts to get thin and wear out very fast. But somehow thanks to director John Lasseter, it manages to inch itself towards the finish line.

Cars 2 takes place a few years after the events of the first cars and has Lighting McQueen and Mater participating in a world grand prix where cars from all over the world can race. This World Grand Prix will also help promote the alternative cost effective fuels called Allinol. At the same time British spies Finn McMissile (Michael Caine) and Holly Shiftwell (Emily Mortimer) are investigating criminal activity involving oil.

While the first Cars had Lighting McQueen in the driver’s seat and Mater as a comical supporting cast member, Cars 2 does a complete 180 and has Mater doing all the work while McQueen does all the supporting. Thing is, it doesn’t seem like McQueen plays any significance at all in this film. This is where is gets a little problematic and when you put Mater, who was initatally created for comic relief as the main in the limelight it begins to get tiresome. But like the first one, Mater is now the fish out of water except its scope isn’t just secluded to one tiny town, its more global now. And while it doesn’t hit the nail on the head, seeing how Mater tries to adapt to these new locations is actually funny. Then again when you combine it with low-brow humor the film reverts back to being questionable. So back and forth we go in a constant tug-of-war between the spirit of Pixar and slapstick humor that belongs in a Saturday morning cartoon. 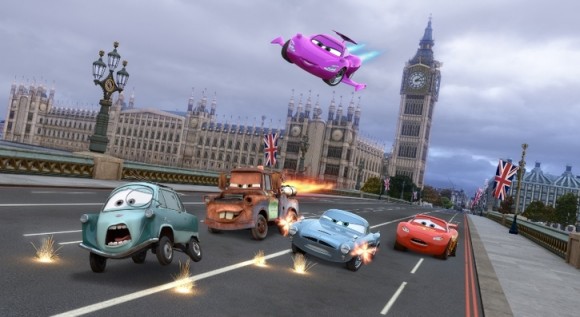 Although Cars 2 isn’t all that bad, it’s just not what you come to expect from the prestigious studio. The animation is tremendously beautiful, the colors are vibrant and the locations are amazing. Surprisingly enough, the 3D for this film works really well. The racing sequences while not spectacular keeps the film afloat, Everything has its own unique Cars spin to it, and when the audience is taken to the Tokyo it seems like Pixar has transformed yourself into a car and you are just as lost and amazed at the lights and sounds. And let’s not forget the easter eggs that are in this film.

Another thing that manages to keep this film afloat is the spy gadgetry. For a film to have guns, missiles, and other forms of artilery is pretty nice to see, but it is also pretty dark for a Pixar film. Still, I like that element as there are a few references to the spy genre which will make the film somewhat watchable for the parents.

The one cruical thing that is missing is that connecting element. The fact that this is a film about world inhabited by vehicles does not matter, in fact that is irrelevant because A Bugs’ Life, the first Cars, and even Wall-E to an extent focused mainly on inanimate objects or bugs. Those three films still managed to connect to the emotional level that we humans have. And that is what makes Pixar so special. Yet in Cars 2, there is nothing to connect to, you do not feel for the characters and therefore you will not care for them. Sure there is that story of friendships being tested again, but that gets done and over with so fast you forget it was even a relevant theme. The subtle tones of environmentalism is a nice gesture to acknowledge the ever growing problems that plague any driver of any vehicle in the world, but I doubt that will play a factor in a child’s mind. Overall Cars 2 is clearly a soapbox car racing in the Indy 500, but you still want to watch it even though you know the soap box car will end up in last place.