In 2009, Michael Bay dropped a bomb on us, literally. For sure, Revenge of the Fallen would be the end of the Transformers series, but alas, Paramount Pictures announced a release date for their third entry in the blockbusting series. Right away, Transformers: Dark of the Moon was scrutinized and bashed, even before cameras started rolling. Two years later, the world is ready to see if Michael Bay can redeem himself, and the Transformers franchise. Long story short: he did.

While a bit of a sensory overload, Dark of the Moon is the best of the series. Unlike Revenge of the Fallen, the story wasn’t bad and actually made sense. The whole plot revolves around why NASA went to the moon and what they found up there. There is a big twist which will completely shock you that leads to the final, hour-long battle sequence. Sure, some of the dialogue could’ve been better, but you have to remember, it’s a summer popcorn flick and its purpose is to simply entertain. In Revenge of the Fallen, the comedy was sort of…forced. This time around, the funny stuff was actually funny and there was no crude, sexual humor either! You’ll also be glad that a certain Autobot duo that stirred controversy do not make an appearance.

For a first timer, Rosie Huntington-Whiteley is actually pretty good! I was completely surprised by her performance as Carly, Sam Witwicky’s (played by Shia LaBeouf) new girlfriend. She is actually a respectable character, her sex appeal as a model is played up well, but not over the top. Carly is actually a key character, but any more on that and I’ll be spoiling you! Shia LaBeouf plays Sam the same way as the last two films, but he tries to grow up as a post-Ivy League graduate looking for a job. Sam longs for the good ol’ days when he fought along side the Autobots kicking Decepticon ass, but the government has rendered him persona non grata. And it’s not long before Sam is screaming his head off and calling on Optimus Prime (voiced by Peter Cullen) for help. 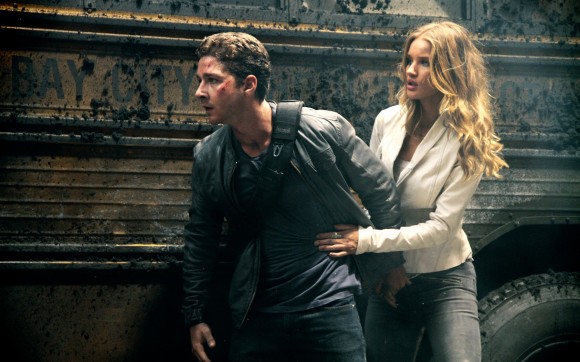 There are several great cameos which I thought were really well played. John Malkovich, who plays Sam’s first boss, Bruce Brazos, is excellent and quite humorous. Ken Jeong absolutely rocks in his role as a retired NASA employee who is mixed up in some sinister stuff.

I had one problem with the movie and that’s the use of a horribly done CGI version of President John F. Kennedy in the film’s prologue. The animators can make a transforming tractor trailer look absolutely real, but they couldn’t give JFK a believable face? Why not cast a real person who looks like JFK? Later on in the prologue we see a rack-focused Richard Nixon, an actor was cast for that role. Then much later on we see another actor was cast as a President Barack Obama. For some reason, Bay couldn’t cast (or animate) people that resembled these presidents in the slightest bit. The rest of the animation was nicely done.

I will say, see this film in 3D. It was shot in 3D (70% was anyway) and it looks great. Don’t go IMAX this time, since it wasn’t shot with IMAX cameras, you won’t get a picture that expands to the entire height of the screen. I was really disappointed by that fact when I saw it in that format last night. If you do go IMAX, you will be paying extra for a glorified Real-D 3D presentation. And I’m really shocked that Bay didn’t shoot with the IMAX cameras because there were a lot of scenes that would’ve looked great in the format.

Overall, Transformers: Dark of the Moon is a great blockbuster film, full of action, drama, comedy and suspense. I will be going to see this film again in digital 3D, the only way to experience the Bayhem!

Paramount PicturesTransformers: Dark of the Moon