Harry Potter the Quest is a new interactive way for fans to prove how much of a Harry Potter enthusiast they are to themselves and their friends. This new site has Potter fans proving their loyalty by having them play games, viewing exclusive first looks, and hearing some samples of the music. And if you choose to register yourself for this quest, you will be rewarded points. More points will be given out as you play more games and explore the site. Hit the jump to see what prizes will be rewarded based on how many points you earn. 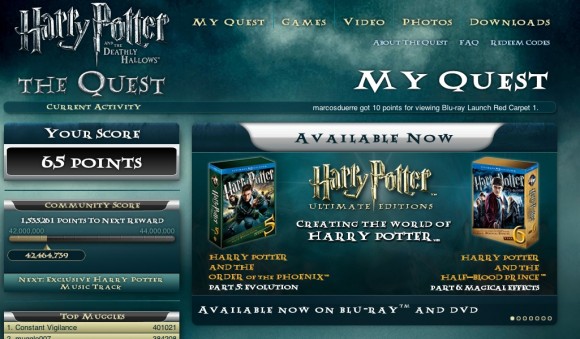 As with all rewards, you will be given a deeper look into the world of Harry Potter. But this isn’t just your usual unlocking a video or new image kind of reward. You also are given the chance to win some very cool Potter related prizes. DVDs/Blu-Rays, soundtracks, and maybe even Potter memorabilia are up for grabs. Some of these games are defeating dementors or taking a photo to create Undesirable No. 1 Posters, a feature we had posted earlier when Part 1 was released. Videos include cast member memories and in depth character analysis. The site doesn’t make it hard to earn these points. Accumulating them is another question, they reward you with so few little points, its does become a little daunting when you see you competition’s score. Some of these games are as simple as just clicking on photos, while others are just sitting back and viewing short clips. This is possibly your final chance to explore the world of Potter outside of the books or movies as there presumably won’t be any more Potter related written works for quite some time.

So for now, enjoy the site, earn points, watch the final chapter this Friday!