I can be redundant and tell you how many years Harry Potter has impacted the world (14 years), or how much money it has made through books, movies and other merchandise (Billions, with a capital B), or how many books there have been (seven), or how many movies there have been (eight), but I would just be repeating what most people have said in their openings (which I just did). Regardless, Harry Potter and the Deathly Hallows Part 2 is a fitting end to a lengthy series and after the dramatic set up in the first half Part 2 ends with one emotional bang.

Before I get into this review I have to be honest with you and say that I have never read the books. I did watch the movies however, and found them to be an excellent form of magic, mystery, and intrigue. So while it doesn’t pain me to see this franchise come to an end, I can certainly respect the people who have cherished this franchise shed a tear or two watching their beloved franchise turn its last page.

Now if you haven’t seen the first half, I suggest you do so now, otherwise you will not understand the quest or reasoning behind it. Yes, I am giving you homework.

For those who think that WB is just splitting the films into two parts to milk it for what its worth, you need to understand that if the film was shot as a singular entity it would have been difficult to tell the story and it also would have been a disservice to the fans. Those who have been following the franchise who haven’t been reading the books or haven’t watched Part 1 will be confused with some of the relationships that seemingly pop up out of no where, who has survived and who hasn’t, or how Harry and the gang came across Godric Gryffindor’s Sword. That being said, let’s start with this review.

The second half literally starts where it left off with the final scene in the first half. Our hero and his band of merry friends have been forced to run. Dobby has died. Hogwarts is being controlled with an iron fist, and everyone’s most hated snake looking wizard has just acquired the most powerful wand ever created. Now its up to our heroes to save the world and wizardry. Can it be done? According to some, no it can’t. But Harry be damned if he didn’t try.

From there that emotional build up that we saw in the first film is gone and is turned into a full on action movie. Again, if this had been shot as one film, it would not have made as much as an impact for the audience. All the teenage angst is out of the way. Unfortunately the action scenes either move too fast or takes too long get through that it can get confusing at times. But the set pieces in all these action scenes give new meaning to devastation and destruction, as the world of Hogwarts crumble before the students’ eyes. But as visually stunning as these action scenes are, the performances and the quieter moments that happen during the action scenes that are the best.

Watching Ralph Fiennes become the sinister Voldemort is exciting. With every wand wave and slithering vocals, you can tell than Mr. Fiennes has been waiting for this moment and will milk it for what its worth. And I can tell you one thing, every scene he is in is truly frightening, and that’s a good thing. The relationships that are finally established can give out a cheer and a laugh. These long-awaited relationships that have been building up to its dramatic end also mark how long this film has come along.

The lack of color also makes for a whimsy apocalyptic end to the school. Its gray stone color like scheme also adds to the emotional scenes, giving it a cold feeling of dread.

I cannot tell what stays true and what has been modified, but based on the screening reaction, fans will be happy. Despite what Yates may have kept and may have left out, the one question that is on everyone’s mind is why choose to do post-conversion 3D, especially when post-conversion 3D has been widely panned. Sure the effect may be unnecessary and may not work at times, but when it works, it works.

Rarely does a franchise as large as the Harry Potter series stay fluid. From the start we watch the three leads Daniel Radcliffe, Emma Watson, and Rupert Grint grow up to be strong actors, and it shows in the franchise finale. It must not have been an easy task, but the cast has been able to stay true to the character without skipping a beat. But it is not only our leads that carry the film, but also the supporting cast that help bare the burden of making the franchise what it is today. 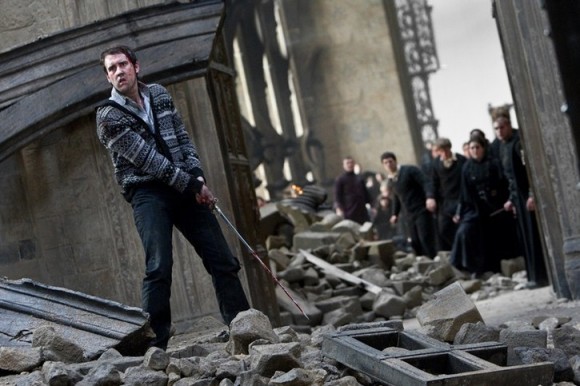 As the film comes to a close, we see (this really shouldn’t be a spoiler) how much our beloved characters have gone through, and after eight films that have spanned a decade, the audience is rewarded with a somewhat quick and seemingly unsatisfying ending. But despite its quick action scenes and ending, I feel as though the emotional build up, the performances, and the relationships that are formed redeem all those minor flaws.

As an audience member who has only seen the world of Harry Potter on the big screen as opposed to the text, I found that the movie did tie up all the necessary loose ends. To say that Part 2 is the best of the franchise would be an understatement, because there are no words to describe how spectacular this film really is. Sure there are flaws in it, but every Harry Potter entry had its flaws.

I may not have understood the Hogwarts lingo, but what makes the entire Harry Potter franchise so special that it was about the character struggles, the underdog stories, the romance, the friendships, and the boy who becomes a man.