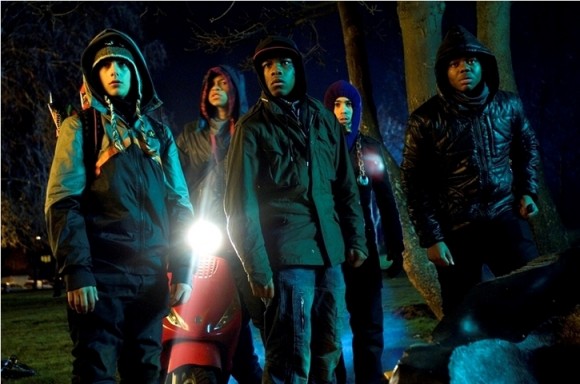 From the moment I saw the trailer for Attack the Block, Joe Cornish’s directorial debut, I knew that this film would be an instant hit with fans of his work and cult movie enthusiasts. Though he is not a household name when it comes to directors or producers, I suspect that will all change the moment the movie ends. This movie is almost able to blend movie genres from across the board seamlessly without effort, but in doing so some of its characters suffer. Still Attack the Block is a very fun film to watch on the big screen and there is no doubt you should go out and watch it. Hit the jump to read the full review. Believe.

Attack The Block takes place in the doggy part of South London, where gangs run rampant and being mugged is almost a way of life. Sam (Jodie Whittaker) is just one of those innocent civilians who happens to cross paths with a new generation of those gangs lead by Moses (John Boyega). He along with four other youths witnesses a star that literally falling out of the sky and crashing right into a car. But as Moses investigates what it is, he comes to find out that it isn’t just a ball of gas or a rock. After tussling with the alien creature, Moses, along with his gang, managed to corral the savage beast and kill the alien.

Of course these kids don’t call the authorities or the news, they take it back to their flats where they discuss the price of the alien and to whom they should give it. But as more of those things start to crash down, and soon they realize that the threat is real and they have to do what they can to not only protect themselves, but the block itself. 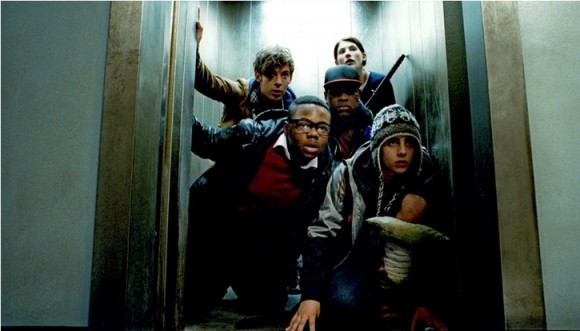 Although the film isn’t lengthy, in fact it clocks in at an hour and 27 minutes, it makes it all up with its wonderful pacing and it ends up feeling longer than it actually should. At no point in time does Attack the Block attempt to take a breather or stop for a moment. This does not make Attack the Block feel rushed, but in fact it adds to the film. But at the same time it does subtract from it. We get scenes where some of the characters want to burst out, but can’t because of the screen time they get. But at the same time scenes where Moses and his gang are trying to outrun the creatures feel tight and elongated.

One of the redeeming qualities about Attack the Block is that Moses and his gang of thugs transcend themselves from gangsters to heroes. Right from the start Cornish has the audience dislike Moses and his gang, from there not only does the gang grow in character but our audience begins to like them. Cornish was able to give Moses and his gang a humanistic quality by having them know what is at stake and have them stay true to themselves to the bitter end. But that quality is very apparent in Moses. From the very beginning we see a darker person, one you would not want to cross paths with, transform into a character that you begin to sympathize with. 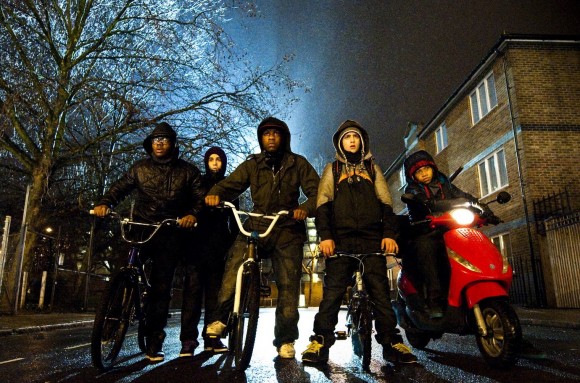 Yes, Attack the Block’s central plot is about defeating the aliens, but there is so much more to it than that. There is action, comedy, sci-fi, and a bit of sentimentality. Blending all these genre’s may not be an easy thing, especially when some first impressions might be that it is just another alien comedy flick, but Cornish is able to blend it so well that you might not even realize what you are watching.

In a lot of ways Attack the Block is a love letter to creature and alien films like Gremlins, Critters, and E.T., adventure films like The Goonies, and gangster films like The Warriors. This 80s letter is crafted so beautifully that it is poetic.

Sure Attack the Block may have a few minor flaws in it, but the movie is so damn fun to watch that all of those flaws will seem insignificant.

Added Note: Screen Gems gave Attack the Block a very limited release on July 29th and it is expected to expand its release sometime in August.