Chris Sarandon Talks About The New “Fright Night”, His Fans, and the Progression of Vampires

Chris Sarandon played the vampire villian in the 1985 Fright Night. The likeness of his character has been replaced with that of Collin Ferrell for the remake that opens this Friday. But you will not see the same campy attitude that was present in the 1980s version, and that is how Sarandon likes it. Hit the jump to see his take on DreamWorks’ contemporary version of Fright Night.

The actor will always hold the original in a place in his heart, not only because it became a cult hit and is revered as one of the great movies in its genre, but because he had such a fun time with the movie. Like the original cast before, everyone that was involved with the movie had a great collaboration and knew that the project was very special. Sarandon didn’t see it as a remake, but a re-imagining of Fright Night.

When they told him that they would have a role for him in this new Fright Night, Sarandon was open to anything. He loved that he could play a character that is consumed by a character who becomes the character. Although it would have been poetic justice if he were to dress in his 80s attire, he realized that if you wink at the audience, you would be making fun of it. So instead he kept it in reality by keeping it grounded.

Sarandon then talked about what it was like to meet Ferrell for the first time. Since he would be replacing him. Ferrell came baring gifts, but their discussion wasn’t about Jerry. They confronted the fact that he might upset Sarandon for his take on his character. But of course Sarandon was very gracious and let him carry the torch. 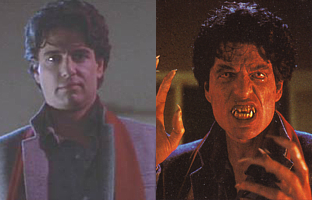 On the subject of 3D, Sarandon was glad that the 3D wasn’t used in a gimmicky way. He said there was a sense of depth to it. He praised director Craig Gillespie for his knowledge of the technology and restraint to use it in a gimmicky way.

When talking about his fans, Sarandon talked about some of the awkwardness that he has come across. Particularly with his Princess Bride fans. According to him there is no demographic, people of all ages will come up to him asking him to sign things from memorabilia to tattoos.

Finally Sarandon talked about the progression of vampires. He is surprised at how they have become romanticized. Although he admits he watches more sports that the evolution of the vampire now, he says that Fright Night brings the name of the vampire to its rightful place.

Listen to the complete interview and the last bit of his theory on why Jerry eats so much fruit in the movie.