Help Dexter Confess and Get a Glimpse at Season 6 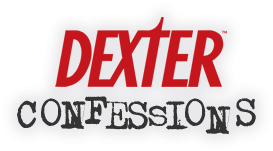 With the fifth season of Dexter being released on DVD and Blu-Ray this week and the rapidly approaching debut of a new season, Showtime has amped up the marketing efforts for their hit show. The network recently launched a Dexter viral website called Dexter Confessions, which allows users to better connect with the Dark Defender by exploring his more personal confessions and unlock some content as well. Hit the jump for more.

You won’t lose any sleep over the complexity of DexterConfessions.com. Simply enter your birthday and choose from any one of the numerous “confessions” our favorite serial killer has to make. Once you have chosen one you feel comfortable sharing on your social networks, you can post it to Facebook and Twitter. It is after you post your confession that the site offers a promo trailer for the upcoming season and DVD release of season five.  It also looks like an image of Dexter is in the process of fully revealing itself based off the confession postings, so stay tuned for further possible surprises.

While some may have been disappointed by certain aspects of last year’s season of Dexter and may be worried the show is nearing the end of its prime, I still believe it is one of the best shows on television, and I am definitely looking forward to the premiere of the sixth season on October 2nd.