The Hunger Games fans have been eagerly waiting to see what the distorted image would reveal and after two days of tweeting signals, the Capitol website has been updated to reveal the Capitol seal. But there is much more when you click on the seal. So hit the jump to see what it is.

The site takes you a registration page where you can register for one of twelve districts via Twitter or Facebook in preparation for the 74th Hunger Games. After registering through one of your social networks, you will then confirm both your name and your email address and your district placement will be revealed. I tried this twice with two different Facebook accounts and whatever info you may have on your accounts seems to have no bearing on where you will be placed. Other than registering your Facebook or Twitter accounts there is nothing you can more you can do actively. Perhaps the next update will have more work involved to earn a few goodies.

In the mean time, the site’s other features will keep you busy. If you look to your right the site has charts and graphs that contain information regarding District Processing Queues, an official Capitol announcements ticker, a countdown to the start of The Hunger Games (in this case the movie’s release date), the district’s goods that are produced, and a tesserae that is claimed by the district. The site claims that all the data is collected in real time. 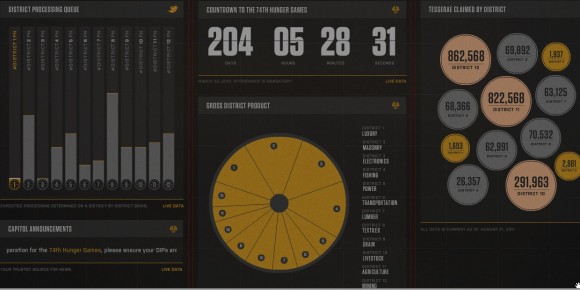 I honestly hope that this viral is much more than just linking your Facebook/Twitter accounts. But so far, the viral is off to a very good start. So I hope that you all join me at District 10. What do you think?