ABC Asks You “What is Revenge”

They say that revenge is a dish best served cold, but when it is served by the steamy Emily VanCamp, then it is something that you want to just eat right up. Revenge is a new ABC drama that is loosely based on Alexandre Dumas novel The Count of Monte Cristo. To promote the new drama, the network has launched a viral site asking you to describe what revenge means to you. Hit the jump for more.

The site, www.whatisrevenge.com, is entirely based on other people’s definitions of what revenge means to them. For some revenge can be defined as passion, but for others it is a career move. Every link has a different meaning to VanCamp’s character, but they all connect to the idea of revenge.

The site asks visitors to share their meaning of what revenge is to them. By clicking on the wooden jewelry chest with the molded stamp, you can write up you own definition in a font of your choosing. Don’t worry about the contents of the box, they serve no purpose in this viral, although I guess they have some sort of meaning in the show itself. After typing what revenge means to you. You then will place your definition in a one of five categories: Romance, Family, Career, Friendship, or Universal. 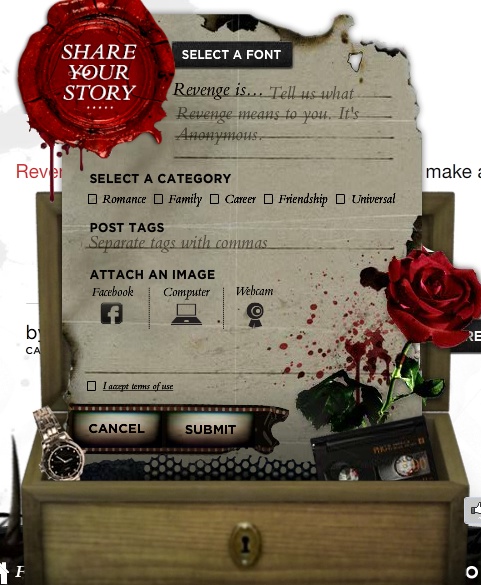 After verifying your e-mail, your definition will pop on screen and of course it is all anonymous, so feel free to vent out everything. Course you have the option of sharing your definition via Facebook and/or Twitter, but if you are like me and wrote some pretty nasty things, you would probably hold off on sharing your thoughts on revenge.