Shawn Levy’s streak of directing some pretty awful movies has caused him to become some what of a pariah with writers and critics. And despite those movies, he still has made it out with some successful projects. But now comes Real Steel, a movie that has lifted the pariah name off his shoulders and into a director that is no longer a laughing stock. Sure it may be a bit campy, but the story works, especially in a movie like Real Steel. Which is why I was completely surprised at how much I actually liked the film.

Real Steel is set in the not too distant future, where humans have grown tiresome seeing other humans beat each other for sport. So to keep the spirit of boxing alive, humans have decided to put robots into the ring to fight other robots. Charlie (Hugh Jackman) was considered the greatest boxer anyone has ever seen, having gone toe-to-toe against the number two boxing contender of the world. But since that world has changed, Charlie has gone to the world of robot boxing and forced himself to become an exile who parlors his robot boxing talents at mid-Western carnivals and battles raging bulls. He isn’t a likable guy and his actions either gets him into trouble or deeper in debt, and no one wants to bet on him. Even his so-called girlfriend, Bailey Tallet (Evangaline Lily), is threatening to put him out on the street if he doesn’t pay up for his rent.

So its incredible that all it takes to pick up his life is to take Max (Dakota Goyo), his estranged son whom he hasn’t seen for 11 years, on a trip of a life time. Battling robots from the bottom of the boxing world to become one of the top boxing contenders. 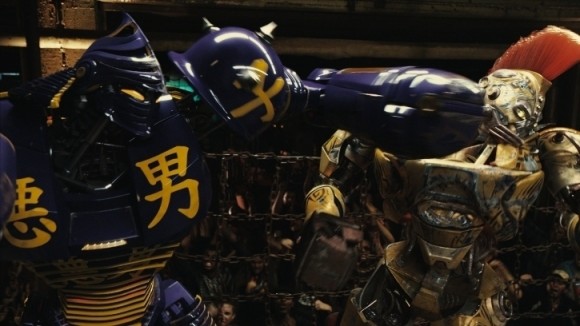 Jackman’s versatility pays off in this movie. Generally the actor plays the good guy or the hero, so the audience doesn’t need to know his intentions until the end of the first act. Here the audience has to warm up to the guy before actually liking him and even then he still gives reasons not to like him until the last 20 or so minutes of the film. It may seem like a cookie cut story of a great athlete down on his luck, but the father and son relationship story was working. Charlie’s banter between himself and Max was hilarious and never skipping a beat. But soon Charlie sees that he isn’t fighting for just money but also fighting for his son. Oh sure it isn’t a teary eyed moment, but at least the moral of the story doesn’t pound you over the head like some other film’s do.

But a lot of Real Steel also rode on the shoulders of newcomer Dakota Goyo. Child stars come and go, but this one was exceptional. He was able to feed off Jackman’s banter and not make that father and son relationship feel artificial. I don’t think Real Steel would of worked with a face that we were familiar with. 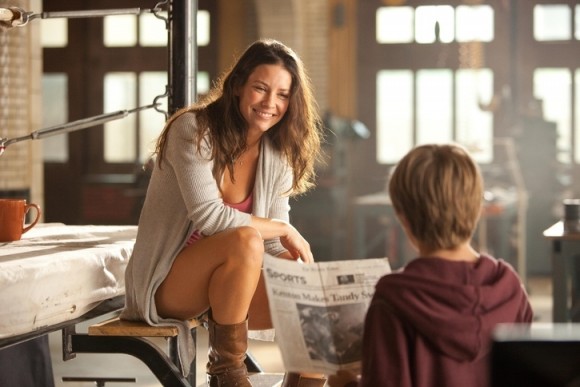 Perhaps the one disappointing thing about Real Steel was the lack of scenes with Lilly. It is explained that her father was Charlie’s trainers and she is his robot mechanic, but there seemed to be no depth to the relationship, and perhaps that is the reason why they were keeping some distance between each other throughout the film. But Lilly does a swell job in her first lead role in a big screen movie. In one scene she is telling Max about his father’s glory days as a fighter. Watching her tell that story with excitement and flare and watching Max’s eyes light up as a result of that has me excited to see what performances she will bring in future roles.

But it has to be Anthony Mackie who was the gem of the screen. Sure Jackman and Goyo were great, but Mackie added flare and electricity with Finn, the Don King of the Robot Boxing world. Mackie seemed to have a whole lot of fun with his role as finn. With all the baby oil lathered on him, leather coats, and large amounts of spit on the microphone, Mackie added his own unique spin on the boxing promoter persona. But boxing affeciantos will recognize the style and grace that King brought to the world of boxing when they see Mackie’s performance. 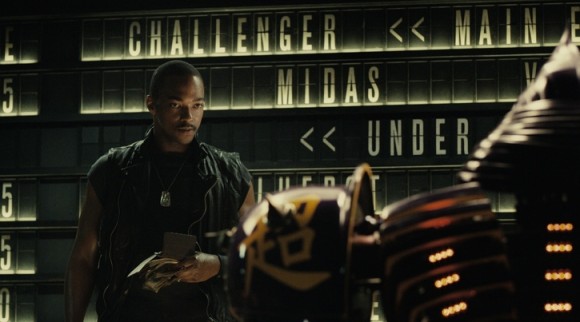 Real Steel’s story is a bit redundant, can come off as a bit campy, and Levy’s style can rear its ugly head out once in a while, but I think if Goyo or robots weren’t in it, none of the cast members would of signed on for this film. But Levy was also able to restrain himself and create a well-directed drama, quite a shock really given that he is so energized and eager to do crazy and outlandish family comedies. But give credit where credit is due, the director was up for the challenge and he certainly delivered.