“The Avengers” Trailer Joins Recycled Footage Trend: Is It Justifiable?

After watching the trailer for Marvel’s The Avengers over 20 times today, one shot stood out to me. I knew I had seen it somewhere before. I didn’t want to seem like a nitpicking fanboy (the trailer is absolutely awesome, by the way), but then I found out I wasn’t the only person who noticed it. Whoever edited the trailer threw in a shot from the Iron Man movie, and recolored it, among other adjustments, probably thinking no one would be able to recognize it. They thought wrong. To see the pic and more about recycled footage, hit the jump.

The first time I watched the trailer, I was completely blown away, but when I saw the quick shot of Iron Man’s helmet closing, a little ping went off in my head. “Where have you seen that before?” I asked myself. Of course, it was a shot from one of my favorite sequences in Iron Man: when Tony Stark suits up in the Mark III armor for the first time before flying off to kick some terrorist ass in the fictional village of Gulmira.

Here’s a comparison of the two shots (click for larger image):

On the left, we see the original from Jon Favreau’s Iron Man. On the right we see the recycled shot with obvious tinkering. The background computer screens have changed color and moved a little. Iron Man has had some of the color drained and his eyes have been turned off. Study the image closely and you will see that it’s the exact same shot. Notice the smudges on the left side of the helmet, the exact same pattern!

Transformers 3 and The Island

There are many reasons why directors would recycle footage, including no money to do reshoots. But in a trailer, why would one need to use recycled footage, from a 3 year old movie at that? I’m pretty sure that shot won’t be in the final cut of the film, I mean, why would it? It’s Tony’s Mark III armor, which is now crushed (thanks to Obidiah Stane/Iron Monger) and is sitting in Tony’s Hall of Armor. Perhaps now I am being a bit nitpicky, eh? But seriously, there wasn’t another 1 second shot from the actual movie to put there? I guess we’ll never know Marvel’s reasoning behind that move. One can never seem to get a straight answer out of them.

What do you think about this recycled footage business? Is it justifiable or is it just laziness? Let us know in the comments below. 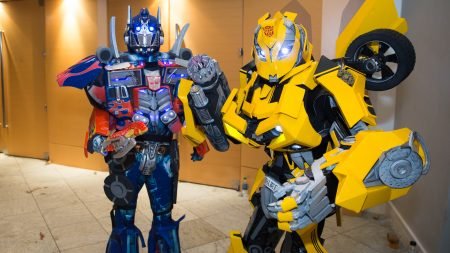