Independent movie theaters are the best thing that could happen to a movie fanatic such as myself. Whether the films are critics’ favorites or cult classics, a theater will most likely screen it. Best of all, they aren’t tied down to the big corporate machine. So that gives them free range to do things such as the event for Mondo Mystery Movie IX. As you can see from the photo above, Mondo went all out for everyone’s favorite zombie movie

For those that don’t know about Mondo, the site basically creates very cool posters from a variety of artists. They recently put up Jurassic Park posters on the market, which quickly sold out. But that is not all they do. Working with the Alamo Drafthouse in Austin Texas, yet another awesome theater, they have an event called the Mondo Mystery Movie. Basically they have a mystery movie and give out a poster that will only available to those who attend the event.

So there have been nine of these events throughout the year. One even held here in Los Angeles. So to celebrate Halloween last night Mondo held an extra special event in Austin, Texas where everyone had to run away from zombies. That’s right real live zombies. Okay not so much real-live but close to it. Those who attended the event, Jeremy Kirk of Firstshowing and Scott Weinberg of Fearnet, were bussed to an exclusive location. Police then escorted everyone on the bus to a mall in Austin where zombies were just waiting to get their dead hands on some brains. When the doors opened, only one command was given: “When we open these doors, run towards the light.”

With that everyone on the bus dashed towards the light. As the zombies started to close in on the living, people dressed in army grab started to fire machine guns on the walking dead. Even Harry Knowles of Ain’t It Cool News had been turned.

“Over 700 people and 200 made-up zombies (courtesy of Hawgfly Productions Inc) packed into the ground floor of the Highland Mall for what we all assumed at this point would be a screening of George A. Romero’s 1978 zombie classic, Dawn of the Dead. I made my way to the front, where I found two seats available, and sat down. A huge screen was set up in the main area of the mall where the always reliable Drafthouse pre-show kept us entertained with zombie-related goodies.”

After serving gummi body parts to survivors, Justin Ishmael of Mondo took to the stage and introduced George A. Romero, who then proceeded to shoot a zombie point blank in the head. So after all the festivities was bussed home and given a specially commissioned Dawn of the Dead poster drawn by Jeff Proctor. 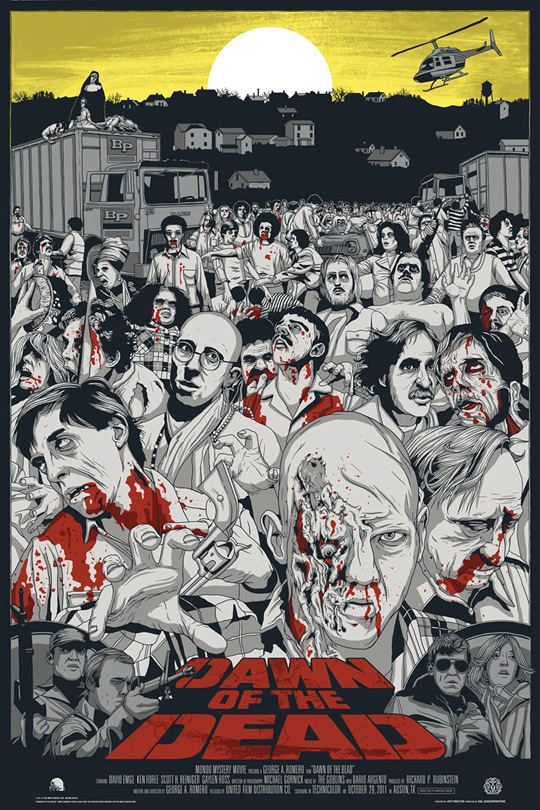 I really hope that any one of our staff writers will get to cover one of these events, because they are one of a kind. This was no ordinary Q&A. This was an all out immerse yourself in the world of the movie event. 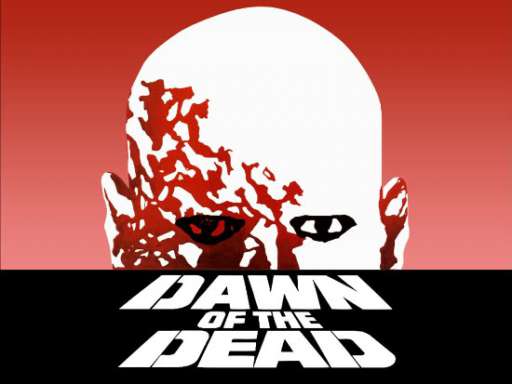