Just a few hours after writing about how The Dark Knight Rises still had hope for a viral campaign, our wish may have come true. Two fake CIA documents have been sent out that that might be the start of the campaign. Get the details after the break.

Empire and Wired each got separate CIA documents pertaining to a Dr. Leonid Pavel. Readers of ComingSoon.net made the connection that the man pictured in one of the documents is actually actor Alon Aboutboul, who has an unknown part in The Dark Knight Rises. 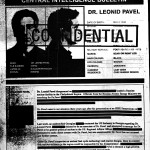 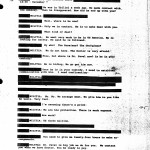 While many blogs are running with the idea that these documents are related to TDKR, there is no real proof. The connection between the actor and the movie could be coincidental. Some are already speculating on what the documents are trying to say, but I don’t see anything discernible at the moment. Let us know in the comments below if you think this is indeed the beginning of the viral marketing for TDKR, as well as what clues you can pick out from the documents. If it’s not for TDKR, what could it be for? Hopefully not gum.

Of course, if this turns out to be legit, we’ll be all over the campaign with detailed analysis, so stay tuned!