“The Hunger Games” Viral: Campaign for Mayor of Your District

When we last reported on the movie viral for The Hunger Games, they revealed district seals and before that they were basically accepting citizenship and district registration. Various districts had various trades, such as mining, farming, fishing, power, etc. So its not to late to become a citizen of Panem. And if you do, you will have a chance to declare that your candidacy for mayor of your district.

To put your name up for election as easy as becoming a citizen of a district. Simply acquire your citizenship on Facebook and/or Twitter and then like the district you were assigned. You will then be given a link that will allow your friends to vote for you via twitter or e-mail. This will allow you to increase your chances to win the mayoral seat. So do you have what it takes to win? Can you speak for your district? Give praise to your districtmen? Be liason for your tributes to up your district’s pride? Then run for mayor of your district. 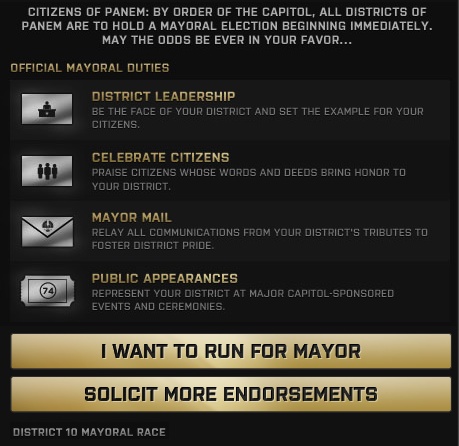 We aren’t entirely sure what you win besides the title of mayor of your district, but becoming mayor allows an “average citizen’s chance to escape the drudgery of District life and shape Panem’s destiny.” So if you are really into ARG, you know what access to The Capitol grants you.