Generally movie audiences are cheering for the hero to save the day, the good guy to get the girl, the down on his luck athlete to make the winning jumper (had to use a basketball reference since the NBA is back), but none of that matters when you can make a compelling villain. But maybe a villain is too strong of a word. Young Adult is that movie that has you cheering for the antagonist and still feel good about it. Jason Reitman directs the dark comedy using a script penned by Diablo Cody. If that team up sounds familiar, it should, they worked together on Juno. So saying that Young Adult is Juno’s twisted sister would be an under statement.

From the moment the movie starts, Mavis Gray (Charlize Theron) is a pathetic mess. Then again, that is even too strong of a word. But whatever she is considered, her life isn’t in exactly in order. As the ghost writer of a dying young adult series, Mavis finds herself with writer’s block, but not because of her inability to create, instead its because she receives an e-mail from a high-school lover Buddy Slade (Patrick Wilson) saying that he is the father of a new born child Some how she takes this as a sign that she and Buddy are meant to be together. So she drives off to dreary town in Minneapolis to rekindle the flame. When she arrives, she feels as through time stands still and nothing has changed.

For the first few minutes of Young Adult, I understood that the movie wasn’t going to be anything like Juno in the slightest way. The way that Mavis carries herself from the moment she wakes up just tells me she looks at the glass half-empty. Her dark eyes, artificial smile, and smug look tells the audience that she s stuck in an arrested development. She always finds herself clinging to the past, unable to let go of the fact that she and Buddy were always meant to be together. She does however put her previous marriage, high-school classmates, and other things about the town of Mercury in the back of her mind. She literally has memories of Buddy pass through the filter.

But what makes Young Adult work so well is Jason Reitman’s ability to throw that unsuspecting emotional curve ball. While you are laughing throughout the movie, you get sucker punched by the emotional moments in the movie. The time where Matt (Patton Oswalt) described the low-point in his life isn’t a tearjerker, but it does tug at a few heart strings. Then Reitman is nasty and twists it with Mavis mocking Matt. And that is just the tip of it, there are more moments like that. 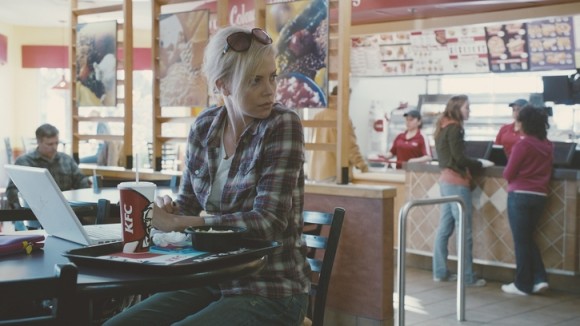 Throughout the entire movie, Mavis hears that she is the only one who has changed and that everyone else has stayed he same. She continuously goes through these fashion changes to point out that she truly is the only one who has changed. Ironically she hasn’t. Everyone gets older, but some people just don’t grow up. Shopping for clothes, frequent visits to the beauty salon, any beauty touch ups to get the attention of Buddy and signify that she has changed. In fact it is all just one big comedic downward spiral for Mavis. Her self-destruction is something you cannot take your eyes off of.

Our past makes us who we are, we can either learn from our mistakes or just embrace them and continue on to be the same person. Mavis is just that. Someone who hasn’t learned and Matt is enraptured by it. Matt is a very compelling character too. Misunderstood as a fat gay kid, who is actually straight fat typical nerd. Sometimes it felt as though you were watching Patton Oswalt and not Matt. Regardless of that small aspect, Matt is a wonderful character to watch who is the only person willing to confront Mavis on how everything she is doing is a mistake. Another part that makes Matt so wonderful is his love for Mavis. Its actually genuine, like any other stereotypical high-school kid who is shunned by the hot prom queen.

But he too hasn’t exactly changed. For one thing, he should hate her for being ignored for four years. Mavis doesn’t even remember him until she recognizes the limp and the label “The Hate Crime Guy. “He was beaten to within an inch of his life by some jocks who thought he was gay (even though he isn’t). Ironically Matt mocks Mavis’ desperate attempts to make Buddy fall in love with her.

As aforementioned, it is fun to watch Mavis on the road to self-destruction. Theron is able to balance the evil-side and the sad-side of Mavis throughout the entire movie. And all her failed attempts to rekindle anything will garner the audience’s sympathy.

Overall, the movie is just perfect, with the right amount of emotion and comedy balancing each other.