Through Operation Early Bird, fans were given a chance to see the opening sequence of Christopher Nolan’s final chapter in his Batman trilogy, The Dark Knight Rises. I was able to snag passes to the event and you will not believe how awesome the footage is, especially on an IMAX screen! More after the jump.

Without spoiling anything major, the film will pick up right where The Dark Knight left off with Gordon delivering the eulogy at Harvey Dent’s funeral. This portion is in 35mm, but we are immediately thrust into the IMAX sequence and Operation Early Bird. It’s a faced paced sequence that (in the context we saw it in) is only meant to give you a taste of what’s to come and introduce you to the villain, Bane.

I like the way Chris Nolan sets up Bane’s introduction, it’s very reminiscent of how he chose to introduce the Joker back in 2008. One of the major problems I had (and that everyone else had) is that you can’t really understand what Bane is saying. You make out bits and pieces of it, but you can’t comprehend anything. His voice is very interesting; it sounds like a normal voice mixed with a voice produced by an electrolayrnx.

The situation you are thrust into is one of the most exciting things I’ve ever experienced in a movie. I just know the stunt guys thought Nolan was absolutely crazy when they learned what he wanted them to do. And they make it look so easy! This is so hard not to talk about, but just think the tumbling hallway sequence in Inception…but 30,000 feet in the air. Yeah, mind blowing stuff.

Not only should the stunt work be commended, but the camera work as well. This entire sequence was shot with IMAX cameras. If you know anything about IMAX cameras, you know that they are huge, very heavy and quite loud. After seeing this, you would think that an IMAX camera must be the smallest thing in the world. Things were done with these cameras that have never been done before in a film like this.

I also really loved Hans Zimmer’s theme for Bane. I could make out the “The Fire Rises” chant in there. It was just too good for words and really thumps through the IMAX sound system.

By now, many of you have probably seen the bootlegs that are floating around (and swiftly being taken down by Warner Bros.), but I beg you, please do not ruin the experience by watching this prologue on your computer. The IMAX screens are so big that the cellphone cameras can’t capture the entire picture. This was put together for YOU, the fans, to experience a taste of this film months in advance. If your local IMAX is playing the prologue this weekend, go experience it there, on a 70 ft tall screen with a laser-aligned sound system. Your 17-inch computer screen with Beats Audio built-in will not do this justice, trust me.

We were also given these cool t-shirts: 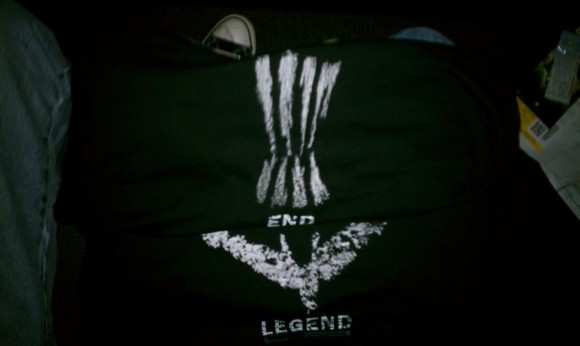 Notice how Batman’s symbol sort of looks…broken? People were trying to figure out what they meant. Well, Batman is the “legend” and Bane (who is represented by those jagged lines, which look like his mask), brings the “end” of the legend of Batman. Which also explains the broken bat symbol.

You can see the opening sequence of The Dark Knight Rises starting this Friday, December 16th in front of Mission: Impossible-Ghost Protocol at select IMAX theaters!