Warner Bros. has sent some film websites (not this one unfortunately, at least not yet) some really cool swag on the Eve of The Dark Knight Rises prologue debuting to the public as an attachment to certain IMAX showings of Mission: Impossible – Ghost Protocol. There’s a Bane t-shirt that is pretty badass, but more importantly, there is a map of Gotham with certain strike zones marked off. Could this be part of the viral marketing campaign? Let’s investigate after the jump. 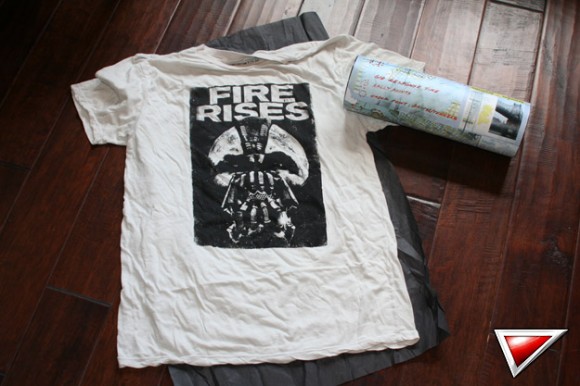 Above is the package in question. You can see the full gallery at ComingSoon.net, but the tube that the Bane shirt comes in has the map going around it. ComicBookMovie.com actually has a composition image that lets us see the entire map at once, which you can see below. 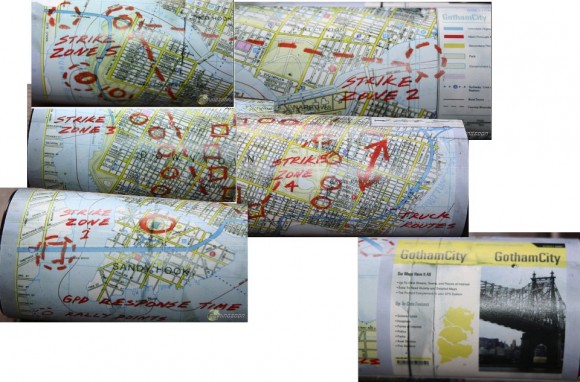 Considering that one of the plot points speculated about the film is that Bane deliberately causes a citywide riot, this map could be part of his plans to do just that. Surprisingly, while the fictional city of Gotham has been depicted in many ways, this map actually matches ones made by DC Comics. Unfortunately, aside from that tidbit, there doesn’t seem to be any clues easily accessible. Who knows if the map is even meant for viral purposes?

Take a good look at the photos and let us know if you find anything of note. We’ll keep an eye out for analyses and provide an update if there’s more to this map than meets the eye.

Follow all of our coverage of The Dark Knight Rises here.