Featured App: “The Devil Inside” for iPhone, iPod, And iPad

There are far more ways to experience a film beyond the theaters. Apps for your smart phone or tablet are the newest form, and that’s where I come in. My job is to weed out the bad and send through the good.

Today’s featured app is “The Devil Inside” for the iPhone, iPod and iPad. So sit back and let’s get the party started. Hit the jump to see how this app performed and whether it’s worth the download.

I’ve actually never heard of this film, to be completely honest with you. I had to YouTube the trailer to get brought up to speed. For a film that’s being released on the 6th of January, there has been very little promotion. That must be why they release this app for the iPhone and it’s multiple sister products.

The film is a “Paranormal Activity”-esque possesion film, centered around a camera crew and their documentation of a woman who murdered her family after spirits inhabited her. The app itself doesn’t go too far of course from that idea, and is rather simple, displaying itself as quick test scanner to identify any demons that may live within you.

The app is free, and starts off, upon launch of the app, with a picture of the poster, a short, one sentence instruction, and then the option to start the actual test.

The app then proceeds to ask you a series of questions. I answered no to all of them because they involved possession, which has never been a problem with me.

Once you’ve answered all the questions, it has you line up two red crosses with your pupils. 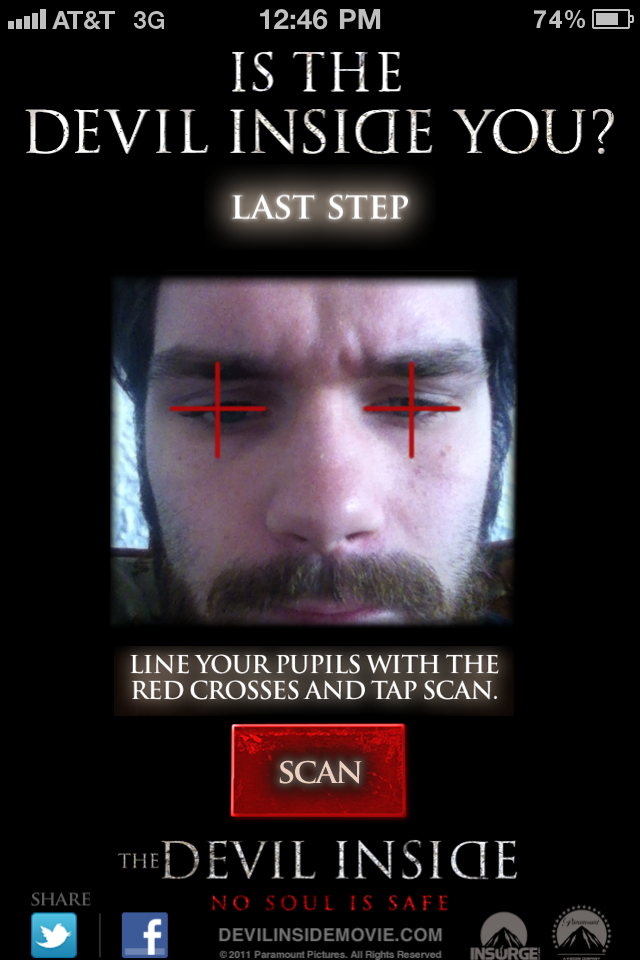 I won’t spoil what it does from here, but I will say one thing: I was not impressed.

It’s a dated concept in a time where it takes a hell of a lot more to impress a viewer. The app was free, so I wasn’t too upset, but I would like to write the studio and get a refund on my time wasted. It’s very predictable, but hey, like I said, it was free, so if it seems like you might dig the movie, then get the app.

Just don’t expect much in return.