At the end of the summer finale, the wife of FBI agent Peter Burke, Elizabeth Burke, was kidnapped by criminals searching for Neal Caffrey’s stolen Nazi treasure. USA Network is now giving fans the chance to help find Elizabeth via a new, immersive social experience, leading up to the mid-season premiere on January 17th. More after the break.

Now until January 17th, fans can join the search and post where they think Mrs. Suit is being held at WhereIsElizabethBurke.com. Each day, a new clue will be posted, including exclusive video and audio, from the crime scene along with additional evidence. White Collar series creator and executive producer Jeff Eastin will provide feedback and hints during the mid-season premiere. Eastin will also choose a lucky fan to be featured on air. 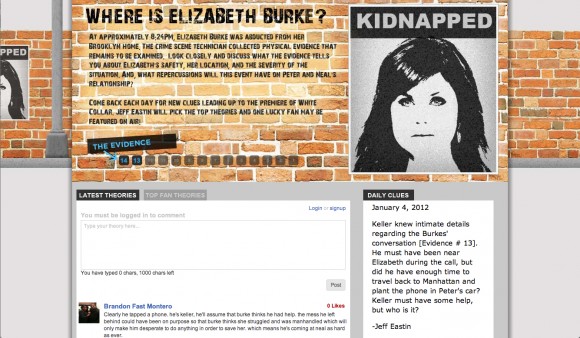