Sundance is not only home to some of the best movies the world has to offer, its also the place where various movie studios bid to purchase the rights to distribute them. But since this is a site about viral marketing, we aren’t going to cover any purchases, and instead focus on the new viral activity that has been taking place during the festival.

As some of you may know the Tim and Eric’s Billion Dollar Movie, the feature-length version of the duo’s popular Adult Swim series of the same name, will officially hit theaters on March 2nd, but goes on demand tomorrow. The duo behind Tim and Eric’s Billion Dollar Movie wants you to sign a pledge that states that you will see their movie and not Universal’s The Lorax. Hit the jump to see how you can get involved.

As aforementioned, the two have created a pledge that says you (plus one member of your family) will see their movie instead of The Lorax on March 2nd. Here is the exact pledge that you will be signing. You can download the full pledge on the official Tim and Eric Facebook fan page here. Then upload a video of yourself signing the pledge on youtube. 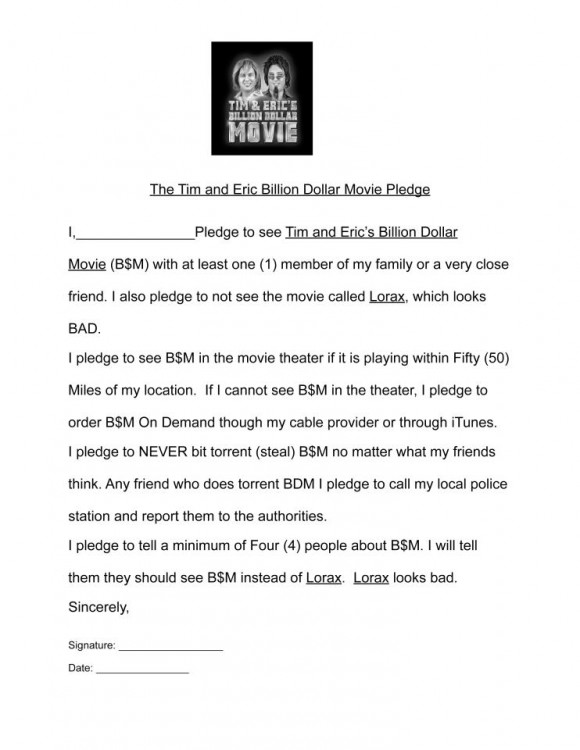 To get the pledge going, some of the biggest names in Hollywood, including Paul Rudd, Elijah Wood, Andy Samburg and Rashida Jones, have already signed the pledge, which should be some sort of incentive for you to do so as well. Below are just some of those videos of actors and actresses signing the pledge.


Tim and Eric themselves asking you to sign the pledge