Editor’s Note: A new and rather popular fan-based ARG has cropped up for the BBC television show Sherlock. After the jump is an account of the ARG from one of those fans. Enjoy.

The BBC television series Sherlock is a modern day re-imagining of the adventures of Arthur Conan Doyle’s classic detective, created by Steven Moffat (current showrunner for Doctor Who) and Mark Gattiss (who costars as Sherlock’s brother Mycroft). The key elements of Doyle’s stories have remained intact; “the world’s only consulting detective” Sherlock Holmes still solves cases the police can’t with his observational skills, razor-sharp mind, and the assistance of loyal friend Dr. John Watson. But this Sherlock is as thoroughly modern as his inspiration was Victorian. He relies on nicotine patches instead of pipes, is an avid texter, while Dr. Watson is an Afghanistan war vet who relates the detective’s adventures via blogging.

Since its first series of three 90-minute episodes aired in July of 2010 (in the UK; November 2010 in the US), the show has garnered an international fanbase and critical acclaim (including two BAFTA awards), and was quickly picked up for a second season. However, due to demanding production values, a lead actor in production on a major motion picture, and a showrunner captaining another series simultaneously, there were a host of delays between Series 1 and 2. Fans were left waiting nearly a year and a half for the resolution of the cliffhanger. Via Tumblr, they filled the wait by creating their own shared history of inside jokes and memes.

SPOILERS BEYOND this point for Series 2, Episode 3: specific events in the show inspiring the creation of the campaign are intentionally NOT described, but some can be inferred.

Series 2 finally arrived in January of 2012 (UK). After the third and final episode aired, the fandom found itself facing another cliffhanger (of sorts) and another long hiatus, with new episodes planned for early 2013 at soonest. They took to the internet in droves immediately after the airing of “The Reichenbach Fall” (based on the Doyle story “The Final Problem”), an emotionally intense piece of television which inspired equally strong reactions. Among them, Tumblr user earlfoolish made a post “in character” for the story’s universe and then suggested the idea of a guerrilla campaign, inspired by a DIY marketing endeavor by artist Amanda Palmer and the 1950s “Frodo Lives!” campaign:

Imagine being a Sherlock fan in the show universe. You’ve been following John’s blog, stalking Sherlock a bit at crime scenes, try to be within earshot so you can hear him do his deductions. You’ve got cutouts from the papers. Then the news reach[es] you. What do you do?… I would like to propose [a] tribute campaign, to show our love and support. Yes, in real life. We put ourselves in the mindset of the in-show fans…

Earlfoolish suggested #believeinsherlock as a tag and encouraged fans to act “in character” as Sherlock’s supporters by posting up flyers, making t-shirts, and even writing on bathroom walls. The idea spread like wildfire; to date the posting has over 12,000 likes and reblogs on Tumblr.

In just over two weeks since the airing of the final episode of Series 2 on January 15, 2012 and the suggestion of a fan campaign, the response has been enthusiastic and widespread. The “Believe in Sherlock” movement encompasses a number of fan slogans which appear in varying iterations on flyers, homemade buttons, and t-shirts on sites like Red Bubble. Some participants refer to themselves as “Watson’s Warriors”. Flyers reading “Believe in Sherlock”, “Moriarty is real” and other slogans have been spotted not only in the UK but also in cities worldwide, including New York, Dallas, Rome, Marseille and Munich; and from the Czech Republic to Brazil. They’ve been posted outside the New York Stock Exchange and slipped inside copies of the Arthur Conan Doyle stories at libraries and bookstores. Many fan postings have been on college campuses, including my own sighting at the University of Florida near my home. 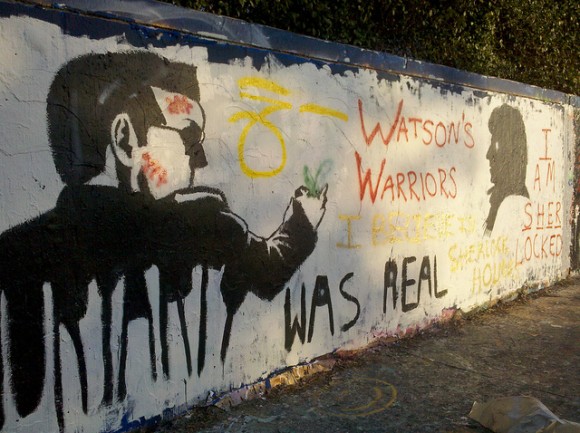 My photo of a large mural on the unofficial official student graffiti area known as "The Wall"; since painted over.

The most high-profile and meta location used so far is the exterior shooting location for the flat Holmes and Watson share in London. As part of “Operation 221B”, fan group The Baker Street Babes temporarily put up flyers and edited their photos to add the appropriate house number: 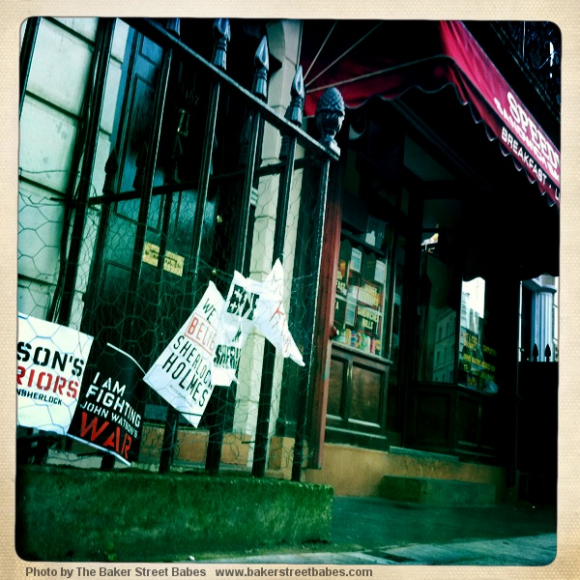 Then, on the anniversary of the fictional first meeting of Holmes and Watson a crowd of enthusiasts filled the sidewalk in front of “Speedy’s Sandwich Shop” (which exists in reality and in the show universe) holding “I believe in Sherlock” signs:

The media has just taken notice as well, lead by the British press and The Daily Leicester newspaper website, who’ve posted an article on the phenomenon.

If you’d like to learn more or participate in the movement yourself, the primary hub of activity is Tumblr, via the “Believe in Sherlock” tag and the Believe in Sherlock blog dedicated specifically to keeping up with the fan campaign. There are a variety of downloadable flyer designs for those who want an easy alternative to designing their own (or resorting to illegal graffiti). There is also a QR code that will display “I believe in Sherlock Holmes” for posting on or offline or adding to your designs. You can participate through Twitter by using the #BelieveInSherlock hashtag, or Facebook communities (the largest located here). Chuck Noblet has agreed to let us share one of his designs right here (two others are available on his Tumblr): 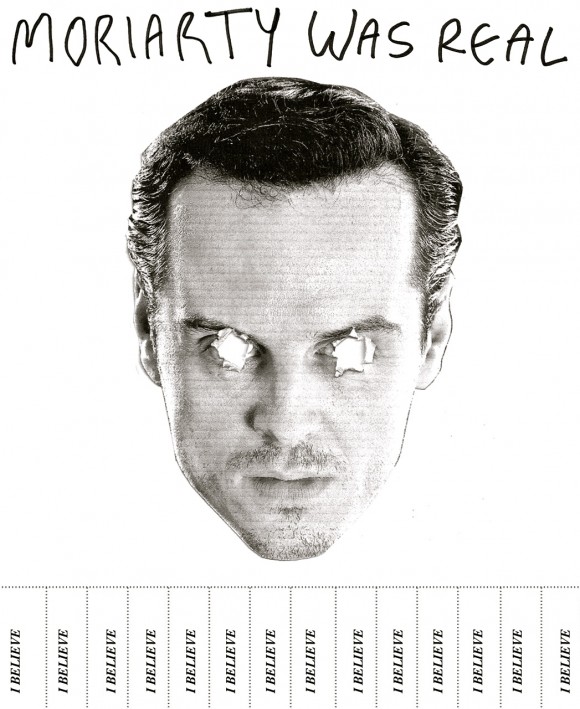 It’s worth noting that there’s something extra special about this campaign, whether you’re a fan of the show or not. The BBC has done some viral marketing for Sherlock, but limited in scope to the blog John uses to talk about his escapades with Sherlock . While guerrilla style marketing campaigns set in the alternate universe of the fictional work are not unheard of (e.g. 42E’s Flynn Lives ARG for Tron: Legacy), to my knowledge a campaign which is fan-initiated, designed, and executed is essentially unprecedented. To date, it’s not clear if the production or the BBC are even aware of it. Series 2 has yet to air in many countries, including the United States (it will be airing as part of Masterpiece Theater on PBS in May), so if the momentum keeps up, you’re likely to start spotting slogans in the wild in your area soon. I’m already participating with my own button and flyer designs and am excited to see where it goes from here. With easily a year to wait for the new series, this campaign is something to watch; the sky is the limit and all it takes is a handful of creative and dedicated fans to take it to the next level.