Just 24 days remain until the release of Gary Ross’ adaptation of The Hunger Games, and to celebrate Lionsgate is allowing you, the fan, to see an early release of the movie via twitter. Only the top four will receive the prize based on how many people tweet a hashtag to a specific city.

Head over to screenings.thehungergamesmovie.com to find out which cities are eligible and what the unique hash tag is for each. Hit the jump to see the map and full press release. 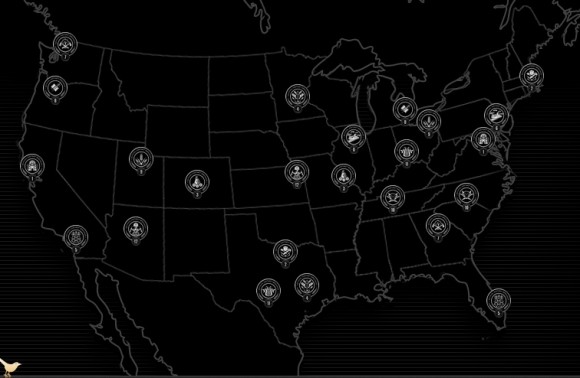 In celebration of another milestone in the countdown to the release of THE HUNGER GAMES- with under 24 days until the film’s release mirroring the 24 tributes in the story, Lionsgate® has announced 24 Advance Screenings brought to you by NOOK® by Barnes & Noble.

Fans can show their support for #HungerGames24 by visiting Screenings.TheHungerGamesMovie.com and tweeting a unique hashtag assigned to their closest city to unlock Advance Screening locations. Starting tomorrow, March 1, the top four cities with the most Twitter volume will be announced each day and fans will then be able to enter to win tickets to those locations.

In the story, Tributes are sponsored based on their first impression at the opening ceremonies, training scores, impressions made in the interviews, performance in the arena, as well as a number of other factors. Donations from sponsors range from medicines to food to weapons and more. Because of this, Lionsgate brought on 12 DISTRICT SPONSORS to each host two of these Advance Screenings and offer 24 fans the chance to win a pair of tickets.

The digital campaign follows those for #HungerGames100, #HungerGames74, and #HungerGames50 which marked milestones in the campaign with similar interactive fan activities.
Be sure to register for a District here and learn more about how to impress your sponsors on Facebook: http://www.facebook.com/thehungergamesmovie?sk=app_240978099326011
Fans who don’t have an advance screening near them may be able to meet and greet the cast at their local mall during the National Mall Tour beginning in March. Visit the film’s facebook events tab for more information.