Last week, the web was buzzing about a viral video released by TED that appeared to be the beginning of a viral campaign for Ridley Scott’s Alien prequel, Prometheus. A website was also launched, Weyland Industries, that said anyone interested in becoming an investor would have the opportunity to do so. The site has been updated and we’ve got the details after the jump!

What was first launched as a portal to the 2023 TEDTalk (labeled as WCCF-73: Module A), the Weyland Corp. site has grown significantly. Instead of a stagnant image, there is now a slideshow of images from Peter Weyland’s speech. There is a teaser for a project Weyland engineers have been working on for quite some time. The image associated with the teaser features a close-up of a fingerprint with the Weyland Corp. logo in the center. Whether this is a human fingerprint or android, we won’t know until the project is revealed. 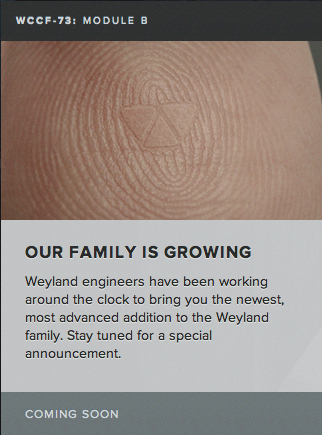 The site now features a navigation panel that will appear if you hover over the Weyland Corp. logo in the top left corner. The menu has several destinations, a few of which are locked. There is an about us page where you can read more about the company and some key facts.Investor Registration is now open to get more information on how to become an investor in the company. Investors will be involved in several classified projects. You will be asked to connect your Facebook or Twitter to your account when registering.

Whatever Weyland Corp. is cooking, expect it to be revealed sometime within the next two weeks.

You can see Prometheus, in theaters June 8th.