The viral campaign continues for the Alien prequel that’s not an Alien prequel. Ridley Scott’s Prometheus has gone the viral route by focusing on Weyland Corp., including creating an official website where a bit of morse code was found on the About Us page. Find out what it reveals after the break.

For those who need to dust off their Alien franchise knowledge, the company Weyland-Yutani is featured heavily, as the company owns the Nostromo, the ship in which the events of the first film unfold. In Prometheus, Guy Pearce plays Peter Weyland, founder of Weyland Corp., which presumably merges with Yutani in between the events of this film and the events of Alien.

The Weyland Corp. website, WeylandIndustries.com was recently updated, and very attentive fans discovered what seemed to be Morse Code on the About Us page. Our own Steve Kidd actually deciphered the code, which can be added to the website’s URL to unveil a stunning high res image, seen below. 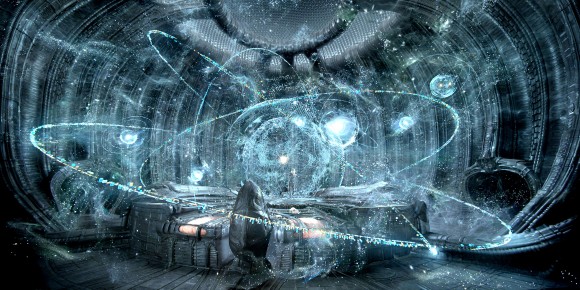 In case you are not aware, the image is from the film’s trailer, and it shows the holographic star map in the Space Jockey control room (according to our friend Anton Volkov). Let us know if you find any other clues that could reveal more cool things like this. We’ll definitely be keeping an eye out.