100 years in the making, John Carter tells the story of former Confederate army captain John Carter (Taylor Kitsch), who is mysteriously transported to Mars (“Barsoom”) where he becomes part of a conflict between the various nations of the planet, whose leaders include Tars Tarkas (Willem Dafoe) and Princess Dejah Thoris (Lynn Collins). Carter takes it upon himself to save Barsoom and its people from a growing threat. So should you check it out this weekend? Find out after the jump.

Honestly, when I first saw the trailer, the movie looked uninteresting to me. But after more footage was released, I started to like what I was seeing. However, I was still cautious because this type of movie really isn’t my cup of tea, especially since I knew nothing about John Carter to begin with.

Taylor Kitsch plays our hero, John Carter. Because I hadn’t read any of the books or comic books (they’re much older than I am and I’d never heard of them before), I don’t know what kind of character John Carter is supposed to be. Based off of what I saw, Taylor Kitsch probably wasn’t the best choice to play the character. He is stiff, boring and his acting seemed forced, especially during a scene where he was supposed to deliver this rousing call-to-arms to a group of aliens. 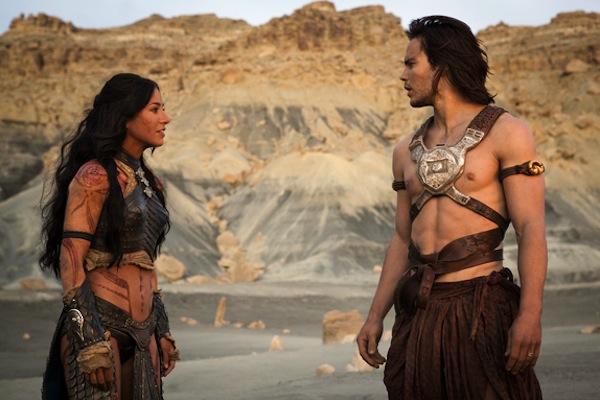 I can’t totally blame Taylor for his portrayal. A lot of the blame also falls on the writers and Oscar-winning director, Andrew Stanton (WALL-E). The script seemed mediocre and cheesy. There are various forms of technology in the movie, more importantly a blue energy, that are never really explained. Then there is this group of “eternal” beings (which sort of reminded me of the Observers from Fringe), that feed off of a dying planet. So in a way, they’re like Galactus.

The movie isn’t all bad though. There are some humorous parts, mostly toward the beginning when John first arrives on Mars. He has his first encounter with the Tharks and their leader, Tars Tarkas. Due to miscommunication and mostly misunderstanding, John becomes known as “Virginia” to the Tharks. I also enjoyed the action sequences, which were visually stunning. It has been said that the John Carter stories influenced the sci-fi genre heavily and I could definitely see that in this movie. But that is also where the film gets into trouble (more on that later). 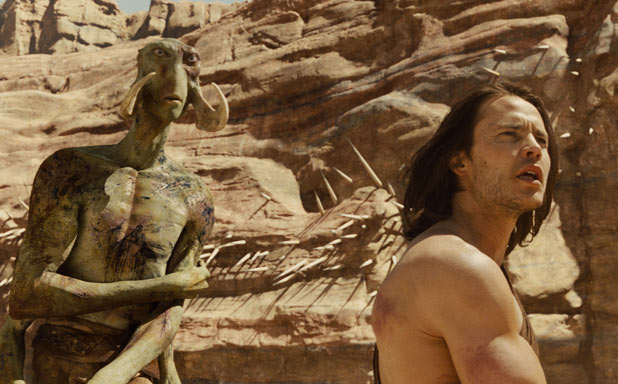 For a post-converted 3D movie, this ranks among the best I’ve seen. And this is the first 3D movie I’ve seen where stuff actually, albeit subtly, “pops” out of the screen. Andrew Stanton used the beautiful rock formations in Utah for the backdrop on Earth as well as on Mars, expertly combining alien architecture with the architecture of nature. I just wish the movie had been shot and shown in a larger format (Even though it’s out in IMAX, it wasn’t shot with IMAX cameras).

Definitely not this year’s first blockbuster (as it has already been characterized by another critic), but it can be tolerated. The kids will enjoy the action and the colorful ships, but they may fall asleep. The women will enjoy watching Taylor Kitsch jumping around Mars. And the guys will definitely enjoy watching Lynn Collins as Dejah Thoris, Princess of Helium, kicking alien ass. But no amount of beautiful cinematography, colorful alien ships or alien-fighting princesses could save John Carter from the dull script and acting.

Even though the film sets up potential sequels, I hope they don’t happen. I wouldn’t sit through John Carter a second time and would definitely steer clear of any sequel. As I said before, John Carter was the influence for a lot of today’s sci-fi, but because it took so long for this film to get made, everything you see has already been done and done much better.