Movie Review: Superman vs. The Elite

As I’ve mentioned many times, Superman is my favorite superhero. While this could make me biased to think that any Superman project is automatically decent, but as a fan, I care about the treatment this hero of heroes. That’s why I was both excited and nervous to see Warner Premiere’s Superman Vs. The Elite last night at WonderCon. Despite the track record of the DC Universe Animated Original Movies, this was my first solo Superman film of the series. Read my full review after the break.

The plot of the film is taken from the Action Comics story “What’s So Funny About Truth, Justice & the American Way?”, which the film’s screenwriter Joe Kelly wrote as well. Directed by Michael Chang, Superman vs. The Elite asks the question: “Is Superman (and his values) still relevant in today’s world?” The film starts with Superman taking down the villain Atomic Skull and turning him over to authorities. The UN and the public openly question why Superman didn’t just kill Skull when he had a chance. When Superman goes to the Middle East to help out in a dispute that’s erupted, a new group of superheroes help him out. However, they are young, brash, and eager to kill those in the wrong. They eventually call themselves The Elite, and the public favors them over Superman. After a turn of events, The Elite try to kill Superman in an epic climatic fight.

I’m not one to mince words, so I’m just going to come out and say this movie is simply awesome. I love the pacing; there’s a good mix of character scenes and action sequences. All the voices are just right, and The Elite, headed by Manchester Black (voiced by the amazing Robin Atkin Downes) are a badass group. There’s some great twists and turns, and even a bit of cursing and sexual innuendo for us grown ups. 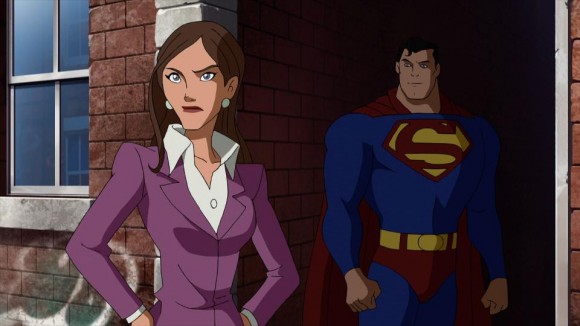 At the heart of this film, however, is that question of Superman’s relevance, and it works here on so many levels. We have become a harder people, looking more for retribution than justice, especially in the wake of events of September 11th, 2001. The US has turned terrorists into animals, and some say we’ve lost our way in our efforts to protect ourselves and stop them. The people in the film are similar, with the film even mentioning terrorism and having a Rush Limbaugh-like personality. Is it morally justified to kill bad people in order to prevent them from escaping capture? When said villain vaporizes innocent bystanders with radiation, it’s easy to understand why the public shifted loyalties to The Elite.

The question of Superman’s relevance has also been a topic of pop culture since gritty superheroes have become more popular and realistic in this post-9/11 world. The success of a darker Batman in various media, as well as the X-Men movies seems to support this assumption. There hasn’t been a quality Superman film since the 70s, and the road to bring one of the most recognized names to the big screen has been tumultuous to say the least. Is there room in Hollywood for a goody two-shoes superhero?

Without giving away too much, the film answers both of these questions of Superman’s relevance with a resounding “YES”. However, to find out how it all goes down, you’ll have to see for yourself. Pick up the Blu-ray of Superman Vs. The Elite when it hits stores on June 12th. Until then, you can follow the film on Facebook to see the trailer and get more updates.