Yesterday at WonderCon was the 20th Century Fox panel that included Ridley Scott’s Prometheus. While the biggest buzz has been the new trailer, the viral campaign got nice shot in the arm as well. Get the details after the break. 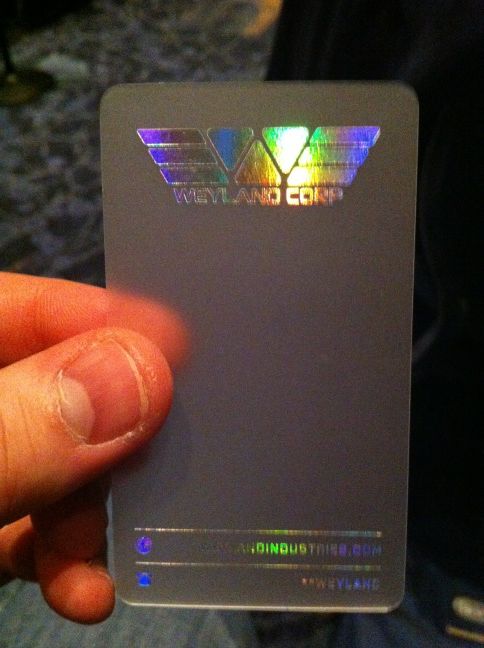 At the panel, each of us in attendance got a business card for Weyland Corp. (shown above), which is the company sponsoring the spaceship and its journey in Prometheus (as well as Alien movies). While being stylish and a nice piece of swag, the real prize was the phone number listed on the bottom, **WEYLAND. When you call the company’s number, you get put on hold indefinitely while they promote themselves. You also get a text message that with a link to a mobile webpage that has a new viral video. The video features David, played by Michael Fassbender, being woken up while Fassbender narrates about how Weyland has created a new form of android that is indistinguishable from humans. This is actually the first confirmation that the character David is an android, along with comments made at the Prometheus panel.

The Weyland website has also been updated with an extensive corporate timeline for the company, starting in 1990, when founder Peter Weyland (played by Guy Pearce) was born. The latest entry to the timeline is Project Prometheus, which includes a link to a new website for said project. Unfortunately, the site is password protected, and the password has yet to be found.

We’ll keep trying to get that password, and we’ll keep you updated on all the viral news for Prometheus, so stay tuned. Thanks to Anton Volkov for digging some of this up.

Ridley Scott, director of “Alien” and “Blade Runner,” returns to the genre he helped define. With PROMETHEUS, he creates a groundbreaking mythology, in which a team of explorers discover a clue to the origins of mankind on Earth, leading them on a thrilling journey to the darkest corners of the universe. There, they must fight a terrifying battle to save the future of the human race. PROMETHEUS opens in IMAX 3D on June 8th. Follow the film on Facebook, Twitter, and YouTube.