A new subpage to the Project Prometheus website was recently found, titled Eridu. Eridu is an ancient Sumerian city in what is now Tell Abu Shahrain. When you type in “tell abu shahrain” into the login section, a new high-res image for the film Prometheus comes up. Check it out after the break. 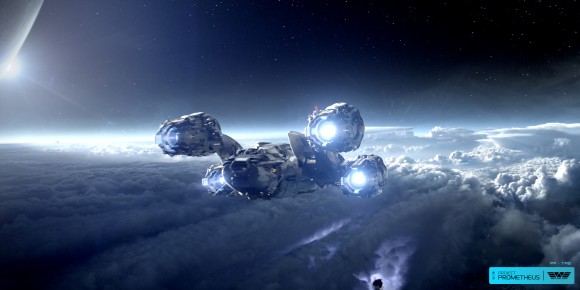 The photo is of the spaceship featured in the film. The Prometheus Twitter page has been helping followers with the puzzle, giving the clue #Eridu earlier today. We still haven’t found an access code for the original Project Prometheus subpage, and there may be more pages for us to find.

Click here for all our coverage of Ridley Scott’s Prometheus, which opens June 8th in IMAX 3D.

* * * * * *
UPDATE: It looks like the first clue for “Eridu” originally came from the answer to a bit of French spoken on the Weyland phone message.
* * * * * *
UPDATE 2: The password for the original Project Prometheus link /245409 has been found, and it reveals another new image, shown below. The number is apparently part of the name of a star where the “Cosmic Call 2” was sent, the structure of which makes up the password: “DDM2DDM2DDM2AMAMAMBIGBIGBIGBMESMPP,”. Check out our friend Anton Volkov’s Prometheus tumblr to see how it was figured out through Twitter.