LEGO Cuusoo is a website like Kickstarter where you can propose ideas for LEGO playlets. If a project gets 10,000 supporters, then LEGO will make it a reality. There are several movie-related projects on the site, but one has gained a lot of steam lately. Learn about the Shaun of the Dead LEGO playset after the break.

One of the more iconic locations in the comedy zombie film Shaun of the Dead is the Winchester pub. The proposed LEGO set would include a detailed version of the Winchester both inside and out, along with several of the characters from the film. 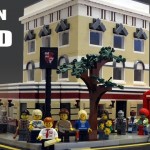 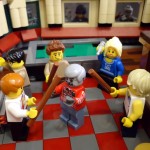 The initiative, headed by online friends Pixel Fox and Yatkuu, also has its own website that has a full gallery and goes into the potential controversy of having such a dark theme for a LEGO playset. The project is less than 200 supporters away from its goal, so it could get the green light this weekend. Shaun of the Dead star Simon Pegg talked about the initiative on Conan this week, and you can watch that interview below.

Would you buy a Shaun of the Dead playset? Let us know in the comments below.