Acura’s S.H.I.E.L.D. Website for “The Avengers” Has Games, Prizes, and Possible Plot Details

Disney and Marvel Studios’ The Avengers opens in theaters in less than a month, but if you’re in need for a fix, the car company Acura has just what you are looking for. After the break, learn about their exclusive S.H.I.E.L.D. website that has games, prizes, and possibly even some spoilers.

In the Marvel Cinematic Universe, the Strategic Homeland Intervention, Enforcement and Logistics Division, or S.H.I.E.L.D., is the secret government agency that puts together the Avengers team, which in the film consists of Iron Man, The Incredible Hulk, Thor, and Captain America. All four have had their own movies from Marvel Studios, while S.H.I.E.L.D. agents Coulson, Hawkeye, and Black Widow join the fight this time around.

As part of their partnership with Marvel Entertainment, Acura is the official vehicle of S.H.I.E.L.D., which leads us to the S.H.I.E.L.D. Ops website. The site acts as a remote depot for S.H.I.E.L.D. agents, which in this case is you. Like most interactive sites these days, you just need to connect through Facebook to login and get access. 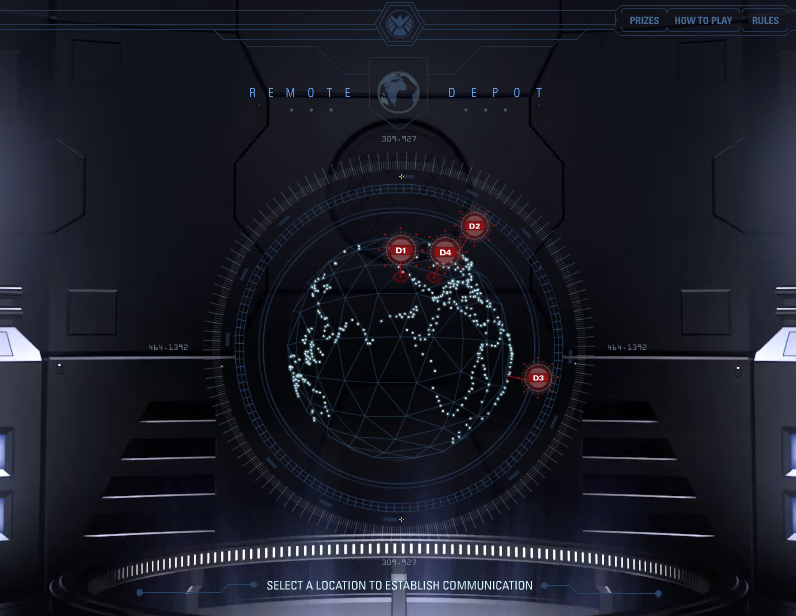 The point of the website is to get you, the S.H.I.E.L.D., debriefed on the four Avengers and to test out weapons inspired by the superheroes,. The globe at the center of the site has files on each hero that you have to uplink too using a sequence of codes. Each file includes “S.H.I.E.L.D. Specs” that explain the character’s abilities, “S.H.I.E.L.D. Tech” that features the weapons you are going to test out, and a combat simulator where you play a game to test out said weapon. The goal is to get the highest scores you can to rise in rankings. You are eligible for various prizes if you achieve Levels 2-5, with Level 6 being the grand prize being the “Tony Stark Experience”, consisting of a luxurious trip for two to New York that includes a helicopter tour of the city.

The bottom navigation bar lets you easily move around the site. You can change what car you use in the simulators via the Vehicle Hangar, and the Agent Hub makes it easy to track your progress. Overall, this is great cross-promotional website that both lets the fans become part of the Marvel experience while highlighting Acura’s line-up of luxurious vehicles. The games are pretty fun, and I’m interested to see if any of these “Omega Level” weapons are actually in the film (don’t worry, no spoilers here).

Try out the website for yourself and let us know what you think! The Avengers opens in IMAX 3D on May 4th. Follow the film on Facebook and Twitter. Thanks to Rick for the heads up.