A few weeks ago, the Project Prometheus website was updated to include space for six new images, three of which were displayed, as they had been discovered earlier. This past week the last three images were revealed, including one we showed you on Friday. See the rest after the break.

For the final three images, 20th Century Fox decided to give certain film news sites exclusives. The Prometheus-Movie.com news site got the Med Pod we featured. IGN got a detailed look at the USCSS Prometheus itself, and MSN got the RTO1 Transport, which is basically a tank for other worlds. These last two diagrams can be seen below (click images for full size). 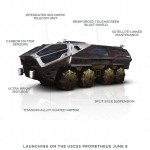 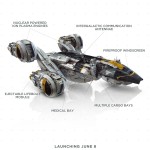