DVD Review and Contest: The Innkeepers

The indie horror film The Innkeepers had a limited theatrical run this past February after debuting in last year’s SXSW Film Festival. The film is available tomorrow on DVD

, and we have our review after the break. Also find out how you can receive our specially packaged copy of the DVD.

The Yankee Pedlar Inn has a torrid history. Over 100 years ago, a soon-to-be bride hung herself in her room after her groom stood her up. The owners tried to cover up the suicide, and the bride’s ghost has been haunting the hotel ever since. Claire (Sara Paxton) and Luke (Pat Healy) are working the final weekend before the Yankee Pedlar closes for good, and when the two go looking for the ghost, they get more than they bargained for.

The Innkeepers is your typical disappointing horror film that builds up tension with little pay-off (i.e. Paranormal Activity). The pace is crawling at best until a frenetic ending that doesn’t make much sense. In fact, not much is explained in the film, though many questions are presented. The actress-turned-psychic (Top Gun‘s Kelly McGillis) that is staying in the hotel is barely used despite her gift, and the fate of a nostalgic old man is used as a random plot device. Ti West wrote, directed, and edited the film, and you can tell that not many other people had any input, otherwise the story would have made a lot more sense.

The chemistry between Paxton and Healy is the only thing that made the long, boring, and uneventful parts of the movie bearable. There are some good tense moments, but they are wasted on fake-outs and uninspired reveals.

Were you a fan of The Innkeepers? You can win a copy of the film on DVD in special packaging that gives it the look and size of a Vinyl album. There’s even a poster inside (see images below)! Just leave a comment below telling us your favorite horror film by Wednesday April 25th at 11:59PM Pacific Time. Be sure to include your email as well! US residents only. 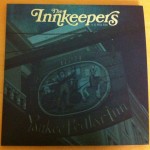 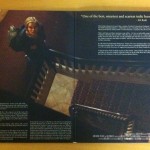 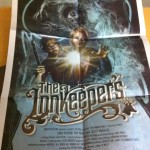