Save the World From the Aisles of Walmart with The Avengers AR App!

Imagine yourself strolling down an aisle at your local Walmart. You’re minding your own business, checking out the sweet HDTVs lining the wall, when all of a sudden, you’re confronted by Loki, the God of Mischief himself! What do you do? You don’t have any superpowers or a robotic suit of armor that you can use to defeat this villain. But wait, you do (presumably) have a smartphone equipped with the Avengers Superhero Augmented Reality App! What’s that you ask? Hit the jump to find out!

Walmart and Marvel have teamed up to bring you the ultimate shopping experience with the Superhero Augmented Reality App! When you first fire up the app, you are only allowed to play as Hawkeye, the Archer. As you progress through the game (and the store), you get to unlock more Avengers, including Thor, Iron Man and Hulk when you come across their sign. You fight enemies overlaid on the real world, leading up to the ultimate battle against Loki.

You can also take somewhat awkward pictures (they’re AR characters) with your favorite Avengers and upload them to the social network of your choosing. In about 3500 Walmart store across the country, you will be able to use this feature when you locate the special hero placard. When you point your phone at the sign while the app is launched, a life-size version of the hero on the placard will appear beside you…on your phone. 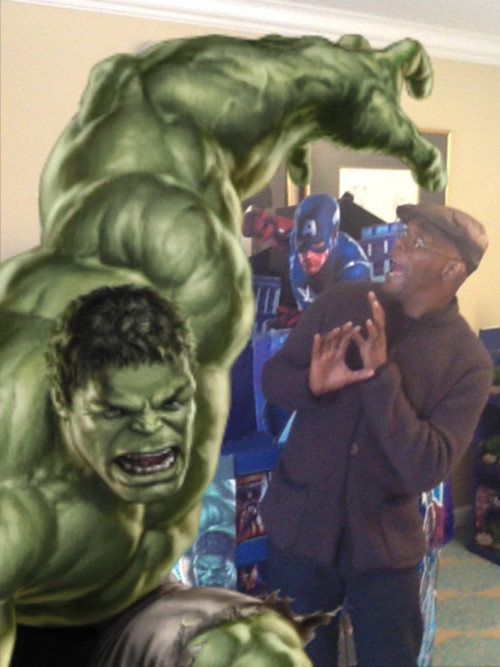 Walmart will be carry over 600 different Avengers movie tie-in products and while you’ll be able to purchase these times elsewhere, the AR app is exclusive to Walmart. T-Mobile is also a partner in this program and will be set up in certain stores where reps will demonstrate the app on one of their Android devices. You can get the Superhero Augmented Reality App from the Apple App Store and Google Play.

Marvel’s The Avengers assemble in theaters and IMAX 3D next Friday, May 4th!