News about what to expect at the upcoming San Diego Comic-Con in July is slowly trickling out, but one event has just been announced that may set the tone for the entire show. Robert Kirkman, writer of The Walking Dead and head of Skybound Entertainment, recently announced plans for The Walking Dead Escape San Diego, an ambitious and epic zombie-themed obstacle and survival course held at Petco Park near the San Diego Convention Center. You heard that right. Zombies in a baseball stadium. Sound awesome enough for you? Hit the jump for more details.

The Walking Dead Escape is the ultimate survivor course, simulating the initial days of the zombie apocalypse set in the world of the story. The goal is to make it to the decontamination zone without being infected, but plenty of athleticism and smarts will be needed to avoid capture. Individuals can sign up to be a Survivor or a Walker, as well as a Spectator if they prefer to watch the events unfold from a distance.

Regardless of what else will be announced in the weeks leading up to Comic-Con, I doubt any of it will match the enormity and uniqueness of this event. If there was any skepticism over the popularity of zombies as a genre, or The Walking Dead as a property, this will assuredly put them to rest. I don’t know if there is any precedent for a reenactment like this held at a sports stadium, but it sounds like an unforgettable experience, and I can’t wait to hear about the reaction from those that participate. 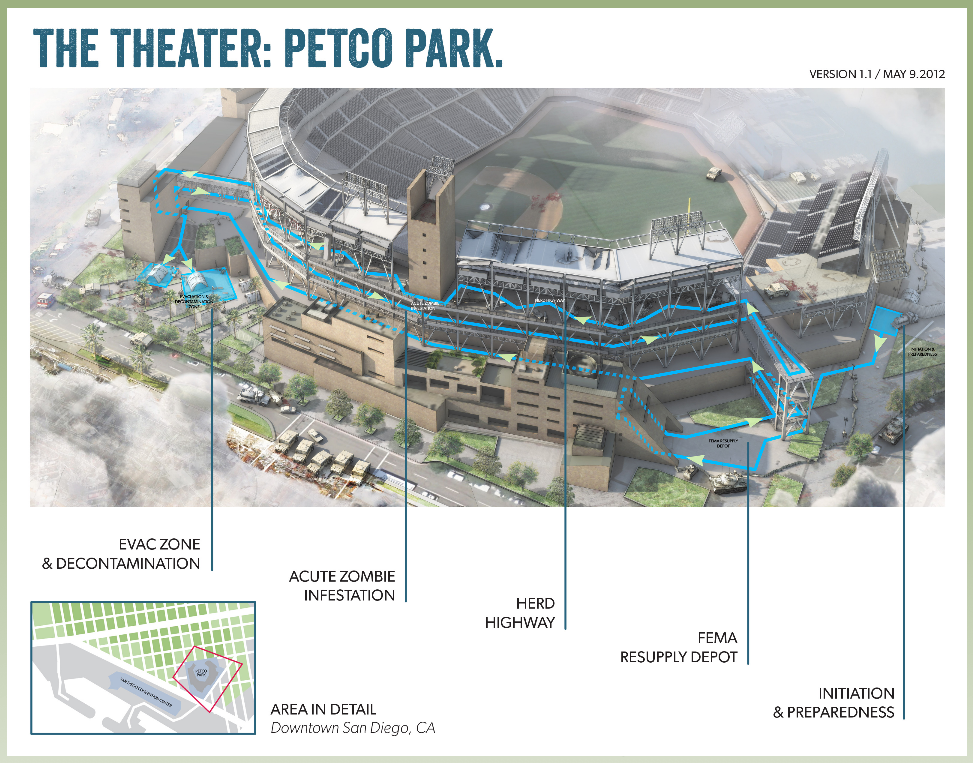 Check out the official press release below to learn more about on the ways you can join in on the apocalyptic fun, and check out www.thewalkingdeadescape.com to sign up.

San Diego, CA – May 16, 2012 –Robert Kirkman, the creator/writer of The Walking Dead comic book series and graphic novels and www.Skybound.com announce their first event, The Walking Dead Escape: San Diego.  In conjunction with the release of the Eisner Award-winning The Walking Dead Issue #100 at San Diego Comic-Con, the event takes place July 12 -15 at Petco Park, centrally located near the San Diego Convention Center. Registration is now open at TheWalkingDeadEscape.Com. There are three ways to participate in this epic adventure. Participants can be a Survivor and race through the zombie infested evacuation zone; a Walker who becomes one of the undead, embracing the inevitable; or a Spectator who watches the apocalypse from sidelines at the Escape Party.

The Walking Dead Escape: San Diego is unlike any obstacle course event in the U.S., expanding on the best-selling The Walking Dead comic book series and graphic novel storylines, allowing Survivors and Walkers to explore the initial days of the apocalypse.

“Our fans have been reading about it, watching it and now they get to live it with The Walking Dead Escape,” said Robert Kirkman. “We are literally transforming Petco Park into the early days of society’s collapse and San Diego is just the first city to fall.”

Survivors will climb, crawl and slide in an effort to avoid confrontation by hordes of Walkers, while achieving the ultimate adventure on The Walking Dead-themed obstacle course. The Walking Dead Escape is not a race, and Survivors are not timed, but the end is near, and they must move swiftly. If they’re lucky, Survivors will reach the decontamination zone at the end where it will be determined if they have been infected.

Whether taking part in the event as a Survivor, Walker or Spectator, participants will be amazed at the interactive displays and The Walking Dead references along the course. Early registration is strongly recommended, as walk-ups may not be available on event day.  This summer, The Walking Dead will be taking over Petco Park and fans will have a front row seat to the real-life action event of a lifetime.

For more information or to register for this event, please visit www.thewalkingdeadescape.com or www.Skybound.com.