This September, Resident Evil: Retribution opens in theaters to become the fifth film in the internationally successful zombie franchise based on the video game series. The Umbrella Corporation, having created the zombie virus, is the arch nemesis to Milla Jovovich’s heroine Alice. However, the job market is still tough, so if you’re looking for employment, Umbrella is recruiting. Get the details after the jump.

While it’s nice to see Sony’s Resident Evil franchise finally create a website for the infamous Umbrella Corporation, UmbrellaCorporation.net, I don’t know if this will lead to a full on viral campaign or ARG. Right now the website is pretty simple. The homepage has your typical corporate look, and an introductory video pops up with a bit of Alice hacking in at the end. Once you get past the video, you’ll see Alice popping up in videos either in the header image or full screen, and she wants to make sure you know how evil Umbrella is. 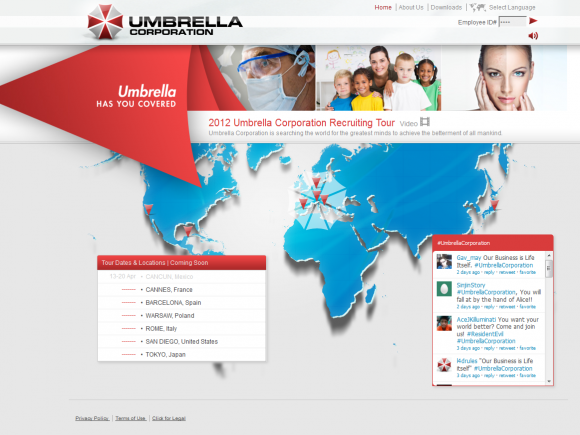 There is an About Us page that talks about the recruiting effort, including an international Recruiting Tour between April and September, though between that and the video, there are no clues as to whether or not there will be a physical presence to this recruitment. The Downloads page has some nice wallpapers and Facebook covers with the company’s logo. There’s not much else to the website, as I said, it is pretty simple.

So, the real question is: Will this lead to a larger campaign? It’s hard to tell, but I think it could go either way. The website is a good starting point for a campaign, and there is even an Employee Login. Right now if you enter anything, it just gives you another Angry Alice video, but maybe it will be used for something more in the future. There are also a few events between now and the film’s September 14th release to kick start a full ARG. The video game conference E3 is in June, and the Resident Evil films usually have a presence at Comic-Con, which is in July. Like usual, we’ll have to wait and see where this all goes.