This weekend, Universal Pictures’ Snow White and the Huntsman opens in theaters, giving us our second retelling of the Brothers Grimm fairy tale this year alone. Is it better than Mirror Mirror, and does it live up to its action-packed trailers? Find out in my review after the break.

Rupert Sanders makes his directorial debut with a screenplay by Evan Daugherty, John Lee Hancock, and Hossein Amini. Kristen Stewart plays the title heroine, who escapes to the forest when the Evil Queen Ravenna (Charlize Theron) whats her heart. When Snow White was a child, her widowed father, King Magnus rescued Ravenna from a mysterious army and was so enchanted that he married her the next day. Ravenna killed Magnus and took over the kingdom with that same army. Snow White was locked away in a tower while Ravenna used her magic to suck the youth out of young woman to keep her young and beautiful. Snow White escapes, and the Queen sends a Huntsman (Chris Hemsworth) to bring her back.

Let me start off by saying that despite my criticisms, this film was much better than Mirror Mirror. This may taint my view towards the positive, but it’s hard to be objective after having to sit through…that. Huntsman is a much darker and more serious version of the famous tale, but both concepts have the potential to work. 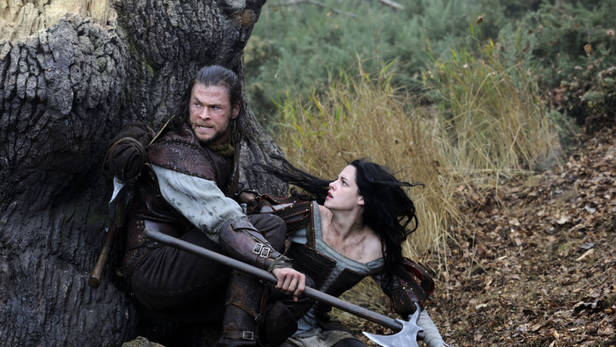 While the Queen’s backstory and character are flushed out nicely, the film’s story is rather thin, especially for a 127 minute film. The pacing was inconsistent, and there were a lot of lingering shots that could have easily been edited better. There was also not a lot of dialogue, which makes these longer scenes even more noticeable. Unfortunately even the little dialogue we had wasn’t spectacular, especially a rousing speech Snow White gives at one point to rally troops against the Queen.

Speaking of the Queen, Charlize Theron steals the show. She gives a great performance, and when added with that intricate backstory, the film felt like it was more about her character than the underdeveloped Snow White. Stewart plays the heroine as best she can given the script’s limitations, and I was surprised by the quality of her English accent. Hemsworth goes for a Scottish accent for some reason as the Huntsman, but otherwise he’s just playing a drunken Thor, which isn’t necessarily a bad thing. The only other notable performances are the dwarves, played by various character actors with some CGI. They are charming, but unfortunately not used enough.

The film has great visuals and style, although some may call it a lite version of Lord of the Rings. There’s nothing impressively original, and the climatic storming of the castle is surprisingly short. Overall, I found myself wanting to like this film more, but it’s weak story and slow pace hinder it considerably. However, it is still a decent retelling of the classic fairy tale, and the best one you’ll see this year.