Of all the crap MTV airs (i.e. Jersey Shore, Teen Mom), it was a surprise when they debuted three fairly good shows last summer. Teen Wolf did very well and was renewed for a second season which began last week. Awkward, which tells the story of a high school girl who rises to popularity because of an accident which was mistaken for a suicide attempt, was also renewed. And lastly, I Just Want My Pants Back, the classic tale of boy meets girl, girl steals boy’s pants after a wild night and boy spends the summer looking for work and the girl who stole his pants. Okay, so it’s not classic, but the show was hilarious, got great ratings and reviews. So when MTV announced that they were not renewing ‘Pants’ for a second season, many fans decided to take their pants off and stuff them into a mailbox.

I Just Want My Pants Back, which is based on a book by David J. Rosen, was cancelled by MTV back in May. The ratings were strong when the series first premiered, but slowly declined throughout its run. In a statement, MTV said that there are “many factors” that go into their decision to renew a series, but decided to pass on the freshman series. While the decline in ratings may have been one of those factors, some people think the biggest factor may have been the line-up of new programming, including the upcoming Inbetweeners and Zach Stone Is Gonna Be Famous, which stars Bo Burnham.

In response the seemingly untimely cancellation of Pants, fans gathered at the Viacom offices in LA and New York, carrying over 500 pairs of pants mailed in by fans from around the country, a move which the resembles the guerrilla campaigns to save Community and Terra Nova. 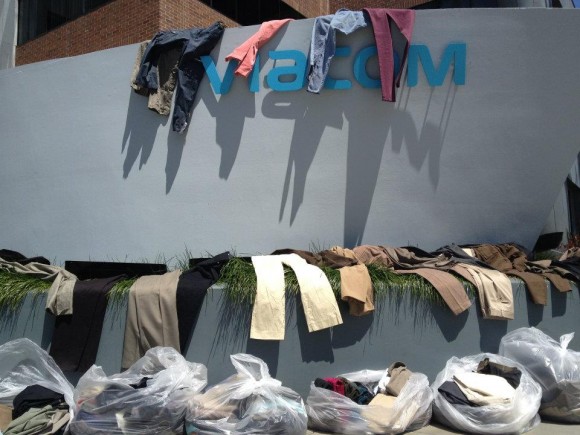 In LA, protesting fans were stopped by security and escorted to the mailroom where MTV head of programming David Janollari accepted the pants, which fans said represent the impact the show has had on them. They also “decorated” the Viacom sign outside of the building with some of the pants. In New York, pants made their way to the office of MTV’s music group chief Van Toffler. There is also an online petition which you can sign here.

While I Just Want My Pants Back wasn’t the perfect show, it was enjoyable and the characters were easy to connect with. Hopefully executive producer Doug Liman can find a new home for the series.