Robert Kirkman is single-handedly preparing us for the zombie apocalypse. In May, he announced The Walking Dead Escape: San Diego, a massive zombie-themed obstacle and survival course held in Petco Park. Now, we learn he’s partnered with Hyundai and designed a Zombie Survival Machine, a concept version of the carmaker’s 2013 Hyundai Elantra. It looks really cool, and you’ll have the chance to see it in person this summer. Hit the jump to find out more.

Hyundai was smart enough to film and interview Kirkman discussing his approach to designing the car and turning it into a nifty little promotional piece, which you can watch below. While he admits he doesn’t know the first thing about cars, Kirkman’s design seems pretty practical. I particularly like the protected sunroof that allows for easier sharp-shooting. Might we see an iteration of the vehicle pop up in The Walking Dead television series or comic at some point in the future? 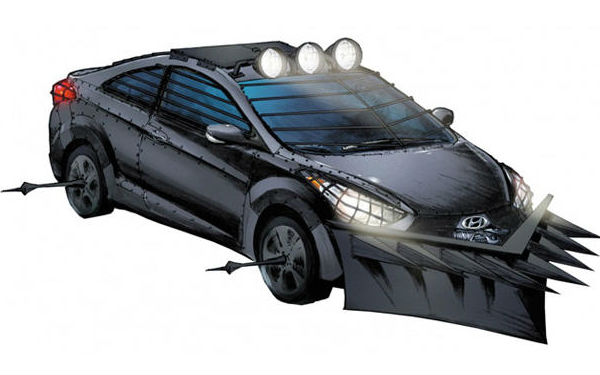 The folks at Mashable keenly noticed the custom ride will be on display at the Future US booth at the San Diego Comic-Con, which, along with The Walking Dead Escape, further cements the property as one of the biggest at the show. For more information on The Walking Dead-Hyundai partnership, check out hyundaidead.com.