As we expected, The Amazing Spider-Man had a viral event yesterday that lead to news of fan screenings in just over a week. I’m not going to spoil it above the fold, so get the full details after the jump.

The /Rigor Oscorp page had a terminal screen that was incomplete. By early this week, the entire text was revealed to be a travel itinerary for Dr. Richard Parker (Peter Parker’s father) from 1999. Since the dates are all the same (June 21st), and there are several cities around the country listed within minutes of each other, this can’t be a real itinerary. Since the date was also nearby, it quickly became clear that these would be locations and times for some kind of viral event yesterday. It turned out to be a deaddrop mission called #OscorpIntrigue.

Some of the dates changed from the image above, and when a package was picked up, the website updated to say “Arrived” instead of “Confirmed”. The subpages “/escape/(city name)” provided specific locations to look for the packages via a handwritten note on Oscorp letterhead (the images have since been removed). New York was the first location, where Richard Parker’s leather bag was found. A member of the Superhero Hype forum explained what was inside:

Inside the bag is a pair of glasses, a calculator, some change, subway tokens, 2 spiders suspended in glass, a bag strap, some pens, an old cell phone, and a document folder hidden in the back zipper, and richard parkers oscorp id badge. 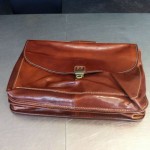 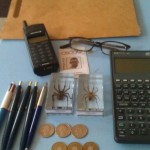 Apparently, every location had the same bag with the same contents, but there was one difference, as a member of Unfiction points out:

There is a folder inside that we will need from each city. Builds out another puzzle. Each piece of paper in the folder contains one of the previous clues / images with two 8×8 grids and a single letter filled in. Start preparing two 8×8 grids and fill them in as contents are published.

The guys at Unfiction (and other forums like Superhero Hype) were hard at work to figure this out. Eventually they figured out that the phrase “offspring of animals of different species through human manipulation” could be read in the grid. There’s a simple word that means the same thing, and that is “hybrid”. Thus, the /Hybrid page of Oscorp was found, which lists all the cities featured in #OscorpIntrigue as being locations for special fan screenings on Monday, July 2, 2012 at 7:30PM.

Check out Mark of the Spider-Man website for pics of Carls Jr. being webbed, but otherwise this might be the end of the viral campaign. What do you think? Did The Amazing Spider-Man ARG end in a thud? Let us know in the comments below.

If you aren’t going to the fan screenings, be sure check out the film when it opens in 3D on July 3rd.