This time of year, we at MovieViral get bombarded with emails regarding San Diego Comic-Con. So, we thought we’d do something useful with the information provided and pass it along to you. If you’re going to the convention, these are the things you might want to check out (including free tacos!). Check out our first Comic-Con news round-up, then proceed below the fold for the latest.

Get the Gringo, the latest action-comedy starring Mel Gibson, will be making its debut on Blu-ray, DVD and Digital Download July 17, 2012

Before the film comes home, it will be making an apperance at SDCC at Fox Booth #4313, where attendees can pre-order the film and participate in numerous activities. Fans will also be treated to loads of cool swag, including an exclusive mini-poster where fans are tasked to find the ‘Gringo’s’. 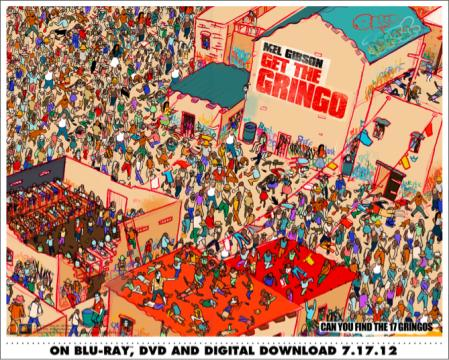 In addition to the mini-posters, Twentieth Century Fox Home Entertainment will be hosting a few fun activities to promote the release, including photo-ops with Lucha libre wrestlers and sexy ring girls (on Friday, July 13 and Saturday, July 14, 2012).

Attendees can also take part in the #GetheGringo San Diego Comic-con social media experience. The ring girls will be carrying posters with an exclusive QR code and fans who scan the code, post photos of the wrestlers via Twitter (using #GettheGringo) or upload pictures to Facebook, will receive a voucher for a free taco from Lucha Libre Taco Shop in San Diego.

OBSERVERS, PHYSICISTS, ROGUE AGENTS AND MORE AWAIT FANS WHEN THEY CHECK-IN TO GETGLUE AT COMIC-CON 2012

Fans Checking-in on GetGlue to WBTV Series Panels at #WBSDCC Will Unlock Unique Stickers and Can Get Bonus Stickers by Visiting the “Extra at Comic-Con®” Stage and the Warner Bros. Booth

Michael Biehn [The Terminator, Aliens] makes his FIRST-EVER Comic Con appearance at the Starz / Anchor Bay booth
#4045 on Friday, July 13th from 1 to 2pm PT, along with co-star/producer Jennifer Blanc (The Divide, The Crow), to sign posters for his upcoming feature film directorial debut THE VICTIM! PLEASE NOTE: Autographs are limited to THE VICTIM poster and ONE other Michael Biehn related item only!!!

Fans stopping by the Starz/Anchor Bay booth #4045 at Comic Con will experience:

Announced last month, the complete adventures of Indiana Jones are headed to Blu-ray for the first time on September 18th and to promote the release, Lucasfilm has revealed that they’re bringing Raiders of the Lost Ark’s Well of Souls to Comic-Con.

Fans in attendance will have the opportunity to pose for photos with a recreation of the famous scene, complete with throngs of live snakes! The Lucasfilm pavillion will be open on the exhibition floor for the duration of the Con at booth 2913.

Fans who pre-order the collection on-site will receive a $25 Sideshow Collectibles gift card while, on Twitter, fans can use the hashtag #Indysnakepit to join the fun in a virtual snake pit. 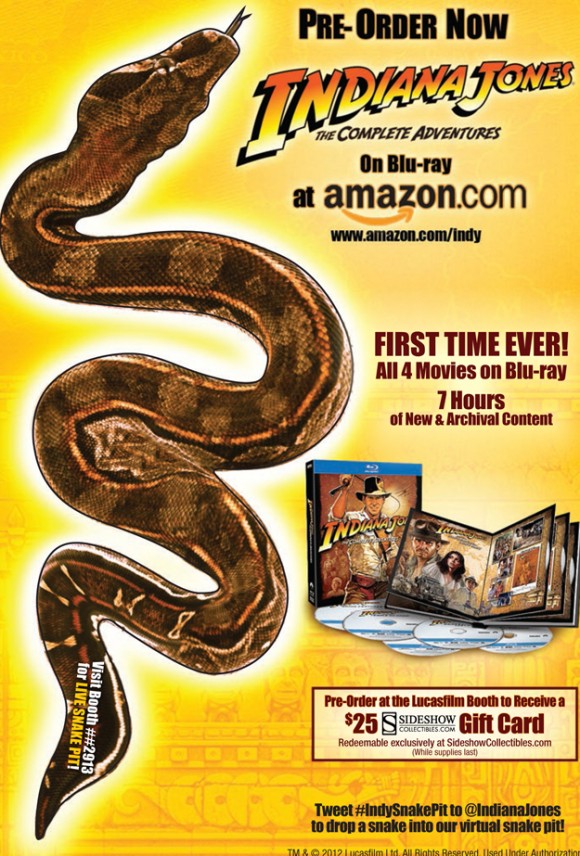