Build and Test Drive Your Own “The Dark Knight Rises” Tumbler!

The Tumbler (and the Bat-Pod) have been Batman’s high-powered modes of transportation in Christopher Nolan’s last two Bat-flicks. Unfortunately, *SPOILER ALERT* the Tumbler was destroyed by the Joker in The Dark Knight. The Tumbler will return in The Dark Knight Rises, but may not be used much by Batman. Fans can now design there own Tumblers with a new feature on the film’s official site. More after the jump.

The Dark Knight Rises: Tumbler Designer, allows you to customize your very own Tumbler and then test drive it on the Wayne Enterprises Applied Sciences track. According to Warner Bros., the online designer was built using the The Dark Knight Rises’ 3-D models for the Tumbler. Using 360-degree views you can choose from an assortment of colors and patterns or upload your own images to customize the vehicle. The lighting can also be changed to accentuate certain aspects of your Tumbler’s design. You can check out one that I designed below (I call it the Tumbler Hybrid). 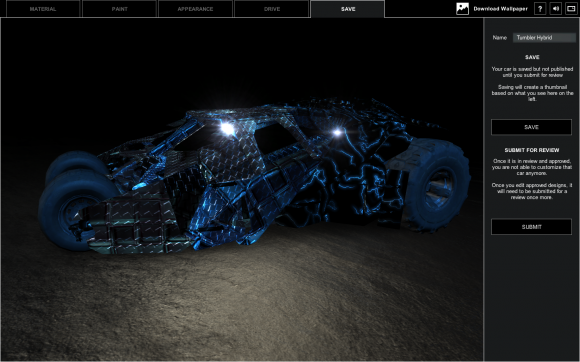 The custom Tumblers can be downloaded as wallpaper and submitted to the gallery or shared on social network sites. You can also drive your creation and others on the test track at Wayne Enterprises. If you pay attention during the test drive, you may notice a special section where you can change the background of the track.

The Dark Knight Rises in theaters and IMAX July 20th!