Zombies have flooded mainstream pop culture in the past few years, and we’ve seen groups use this popularity to create events where you can simulate the experience of a zombie apocalypse. From abandoned shopping malls, 5K runs, and even Petco Park at Comic-Con this year, a lot of people are getting some good practice for the real thing. Now a group called Z World Detroit wants to turn an abandoned part of Detroit into a zombie theme park. Details after the break. 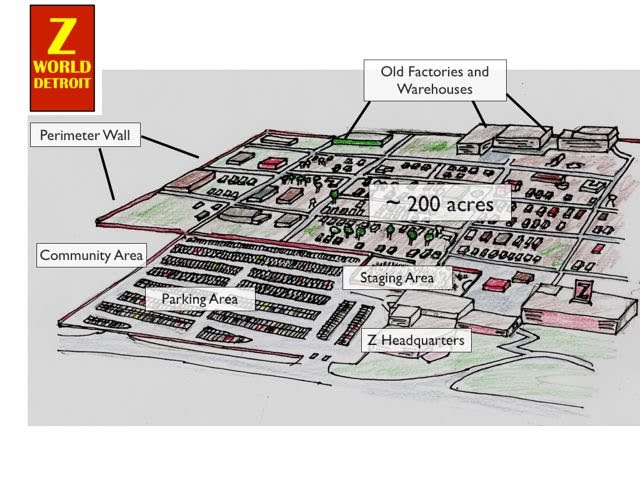 The group goes into the project in great detail on their Indiegogo page, but basically they are trying to raise $145,000 to buy about 200 acres of abandoned land from Detroit to turn into a realistic zombie theme park. There seem to be a lot of social positives to the concept, as they mention in their main statement:

There are formal proposals to essentially abandon some of Detroit’s neighborhoods.

That’s not a solution. Collectively we must be more creative than that.

Here’s an idea that will turn the tables on blight. Not only will this idea turn a blighted area into an asset, a portion of the ticket revenue will go to a fund to demolish abandoned buildings throughout the city. Blight will fight blight!

Here’s an idea to start something fun and unique that will revitalize an area while creating some jobs for Detroiters.

The group also made a video that really breaks down Detroit’s issues and how the park could help.

While I think this will be a hard cell to the city of Detroit, it’s a very innovative solution to a real problem that Detroit is facing. Z World Detroit has really put their hearts, souls, and brains into this, so I think it could work if given the chance. However, while there still is 33 days left, I can’t imagine them raising the $145,000 needed to buy the land. They’ve already received some media exposure this past week, and they’ve only got about $6,000 so far. That doesn’t even take into consideration all the money it will take to actually build the park.

Go to IndieGogo to learn a lot more and donate to the effort. You can also follow Z World Detroit on Facebook and their official homepage.