It looks like the viral marketing for Elysium is sticking strictly to Comic-Cons. The futuristic interplanetary border patrol from Columbia Pictures had a small presence at last year’s convention, and they are back again, but this time they have definitely gone bigger. Get the details after the break.

Last year at the convention, all we saw from Elysium was a sign that directed us to the Armadyne website that had a recruitment video. Armadyne is the company that runs Elysium, the space station where wealthy people now live (the poor live on the overpopulated, ruined Earth). There was nothing new to the website or campaign until this year, when Sony dedicated a large section of their booth to the film. It included a portal to Elysium itself, as well as a humanoid robot concierge in a Border Checkpoint booth, who asks you questions about your qualifications to live on Elysium. You can check out my photos below. 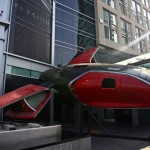 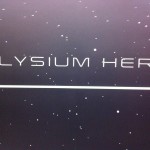 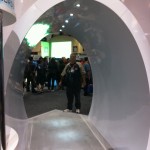 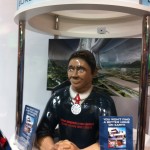 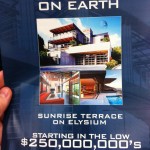 The important piece of the booth, however, was a poster that directs you to a new viral website, titled “Elysium Citizenship Initiative – Border Agent Prescreening”. Here, the same robot asks you to ‘Like’ the page, then gives you a wait time that ends on December 11, 2012. Hopefully, this will be when the viral campaign really kicks off, so register your email to get the latest.

We’ll keep an eye out for more from Elysium at Comic-Con, such as the spaceship across the street from the convention center (shown above as well). Elysium is written and directed by Neill Blomkamp (District 9), and stars Matt Damon and Jodie Foster. The film opens in theaters on March 1st, 2013.