Quentin Tarantino’s Django Unchained made its convention debut at Comic-Con on Saturday, as it kicked off a day full of impressive panels. In attendance were Tarantino himself and stars Jamie Foxx, Christoph Waltz, Don Johnson, Kerry Washington, and Walton Goggins. Get the details of the panel and reaction to footage shown after the break.

Django Unchained is a western as only Tarantino can do it. Jamie Foxx plays the title character, as slave who gets freed by Dr. King Schultz (Waltz), who happens to be a bounty hunter under the guise of a dentist. Schultz recruits Django to help him spot and kill three brothers who kidnapped Django’s wife Broomhilda (Washington). Leonardo DiCaprio plays plantation owner Calvin Candie ,who now owns Broomhilda, and Goggins plays his henchman. Johnson plays another plantation owner.

Tarantino talked about how the general idea of a slave becoming a bounty hunter that kills white men had been in his head for about 13 years. He had also always wanted to do a spaghetti western, and especially a western in the South that had to actually deal with the issue slavery as most western films did not. He also stayed historically accurate as possible, which he doesn’t always do. The topic is obviously controversial (as the many “N words” spoken in the film will be), but that’s Tarantino’s style. Foxx almost forgot about the controversial nature of the film when he had to work, and it was like going to an all-star game every morning with this great cast.

Foxx also talked about how he got into character. The most important thing was letting everything go, throw any ego out the door, and get to work. “Strip everything down”. Tarantino explained it further, saying that he told Foxx that he had to be the 6th of the 7 on the left. Django needed to start there, be anonymous, and then become the hero. Foxx was called the N word by adults when he was growing up in the South, so that helped him understand the script better.

Waltz described his relationship with Django as more complex relationship than someone rescuing a slave and becoming a father figure. It’s a “unique and fabulous relationship” that he seems to really enjoy. Django and Schultz are a team. Schultz is a man out of his element being a German in the US. This is what helps him see something in Django. Schultz is not used to seeing a world with slaves, so when they get into the thick of things, Django takes over. Tarantino explained that he developed a rich backstory for Shultz that isn’t even hinted at in the film where he’s a fugitive from Germany for some reason, and it helps give even more insight into Schultz’s actions and motives. The reason he’s a dentist is that they wanted him to be a doctor, and there’s a preciseness that mirrors his true profession. This also allows him to hide in plain sight. 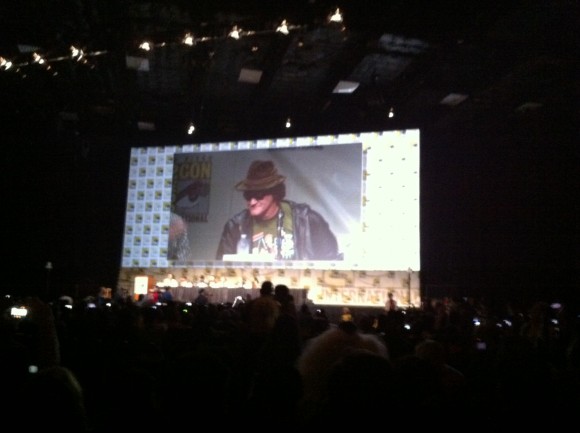 We learn a bit more about the other characters in the film from the panel. Goggins trains slaves to fight for Candie. Samuel L. Jackson plays Candie’s housekeeper, and is almost like a CEO for the plantation and an advisor for Candie. Johnson plays Spencer “Big Daddy” Bennett, a more humorous and flamboyant plantation owner. Washington plays the princess in the tower of the story, and Broomhilda’s odd name comes from previous owners, who were German. Washington had to learn German for the part, and she had to sing a German children’s song because she couldn’t whistle, which the script originally had her character do. Washington apparently learned quickly, since Waltz didn’t need to help her much.

Tarantino explained that Django’s story matches closely with the classic Broomhilda story (hence the name), and that this “save the princess” aspect of the story grew organically when he was writing it. He felt that having a slave try to save another slave that was sold away was original, especially since slaves weren’t allowed to marry. We found out that Jonah Hill is a member of the Regulators, which were a predecessor to the Ku Klux Klan. They have a raid in the film that starts off scary and turns funny.

Tarantino was wearing a fan-made shirt that had characters in his films playing with each other in a sandbox. This brought up the question of whether there are any family connections between Django Unchained and other Tarantino films, since he has a history of doing that. He confirmed that there is, but he won’t spoil it. He did jokingly (or not?) say that John Shaft is a direct descendent of Django.

Someone asked why there are no strong female characters in this film when Tarantino almost always includes that. Tarantino explained that it wasn’t right for the story, and Washington said that her character was strong in her belief in love when there is no hope. Tarantino, a film buff, only gave movies for reference to Kerry Washington and Don Johnson. Washington loved working with basically a film professor.

Finally, Tarantino does not know what his next project will be.

For more of our San Diego Comic-Con 2012 coverage, click here.